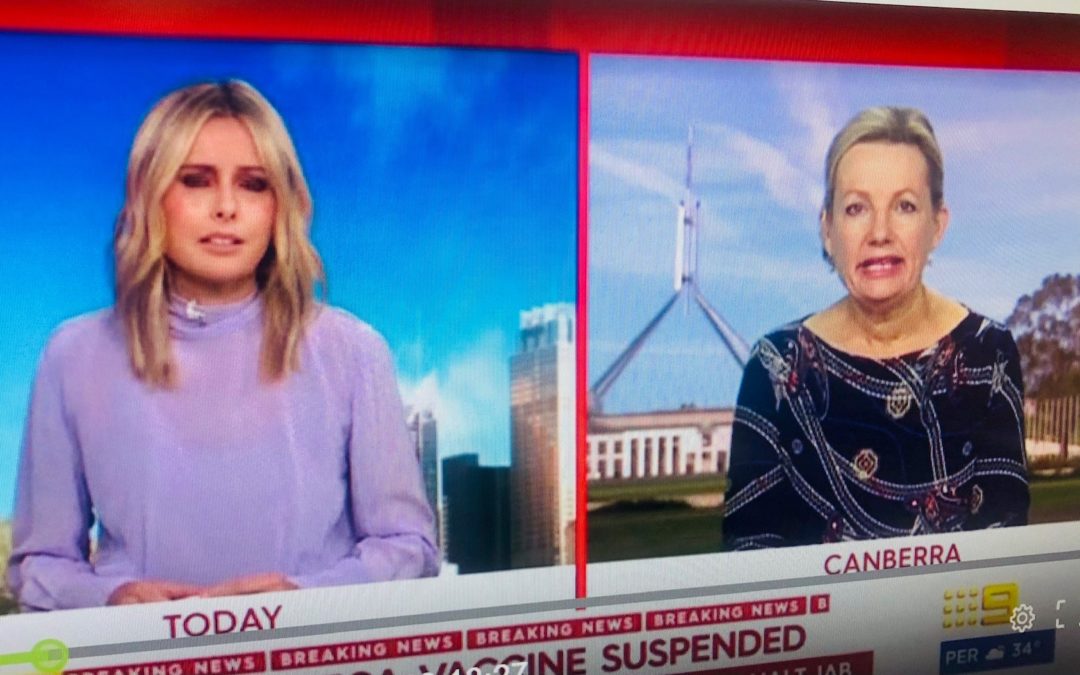 ALLISON LANGDON: Change has been demanded by thousands who marched on Parliament House and in cities around the country in the fight for women’s equality. For weeks, the spotlight has been on Canberra over allegations of sexual assault, yet no senior member of the Coalition attended what was meant to be a partisan march.

Minister for the Environment Sussan Ley joins us now in Canberra. Sussan, thanks for your time this morning. Just before we get do that, I want to talk to you about the breaking news out of Europe. Five more countries now putting a hold of the rollout of the AstraZeneca jab. Do you still have confidence in it?

SUSSAN LEY: Yes, I do Ally. We’re in good hands when you consider the checks and balances of the World Health Organization and here at home, the TGA, we follow the health advice. We of course, tune into everything that is happening overseas but then we rely on that international and local expertise.
So please feel confident in the vaccine. Please if you’re offered it, take it and remember that you’re helping many vulnerable people in the community if you are.

ALLISON LANGDON: I just think people wake up this morning and hear and this list keeps growing. It’s grown since we’ve came on air this morning. Portugal has just joined. We know Germany, France, Italy and Spain, they’ve all pressed pause. What’s the issue with just saying: okay, we’re just going to take our foot off the accelerator for a moment and just double-check, triple-check, that this is safe and it’s not linked to blood clots.

SUSSAN LEY: Well, if we got that advice, I’m sure that’s what the Health Minister would advise and I’m sure what the Chief Medical Officer would advise. So, it’s not the case that they aren’t listening and taking in what is happening overseas. But it’s vital that here in Australia, we take the best health advice.

And I just want to reassure Australians, having been a Health Minister, that the checks and balances that we have in place, that the real rigour, that the approvals process for medicines is one of, if not the strongest in the world.

ALLISON LANGDON: Well, I mean, I trust our health authorities and I’m still planning on getting the jab when I can.

ALLISON LANGDON: But I know lots of Australians are asking questions this morning. But I do want to move on and I want to talk about those rallies yesterday. Why didn’t you attend?

SUSSAN LEY: I didn’t attend the rally. I didn’t have to be there to understand the passion and the concern and the energy that was outside Parliament where I have worked for many years. I respect every single woman who did. And Ally, I respect those who couldn’t make it. Because across Australia, you know, rural Australia, where I come from, in small towns, I think women paused and they listened and they felt something. And I really felt something too.
But the point I want to make to every single woman listening is that change is coming. And we are determined to be part of that change here in this building. And yes, it was an extraordinary day.

ALLISON LANGDON: I think for a lot of people yesterday it was about optics and I think it would have sent a strong message if senior Coalition members and certainly senior women within the party had just turned up for perhaps 10 minutes.
But I did note yesterday during Question Time, you said it’s important for you and your party to lead by example when it comes to this. So what kind of message does it send to Australians that so few turned out to show their support?

SUSSAN LEY: Well, sadly, too much of politics does seem to be about optics not outcomes. What I want to see is outcomes. As I said, I’ve been a Member of Parliament for close to 20 years. I’ve worked in male dominated industries and I can say that these issues were quite explicit in the work places that I joined, in aviation and shearing sheds in outback Australia. They’re still there. They’re still implicit. They’re still happening. They still make young women angry.
And I want to do something about it. And we are doing a range of things that I could talk about and I will talk about in the days to come. So, this is, this is not about seizing a political moment. Every time we make this about politics – and there was a fair bit of politics yesterday, I understand that – the survivors of sexual abuse, I think they feel somewhat let down. Because we end up talking about ourselves, not talking about them. And close to one in five women has experienced sexual abuse in their lifetime. So, we need to focus on them. We need to think of them and we need to allow them to understand that we care and that we are doing many things to support them. Starting with this building, Ally. Because I do want this to be a workplace of excellence.
And the undertakings that the Prime Minister has made and that we’re doing right now in the consultations that we’re having, is all about leading by example.

ALLISON LANGDON: Because change, as you say, it starts from the top and it’s not just your party, the Labor Party has their own issues. But I did note over past week, you’ve had two senior former Liberal ministers, female, Julie Bishop and Julia Banks, come out and be critical of the boys’ club within your party. There is a problem when these women only feel comfortable raising these issues when they’re outside of politics, isn’t there?

SUSSAN LEY: Well, don’t assume that everything that gets raised in the media is all that’s ever said. There are a lot of really honest conversations happening in this building between women, between women across the Parliament. And you know, if I can step back once again from the politics, I do see this as a point where we can make change – genuine change.
Now, the review that’s been done by Kate Jenkins is an important part of that. And when we see the outcomes of the review, there will be concrete, there will be material things that happen in the building. But most importantly, the culture. The culture that sometimes is allowed to get away from us, that sometimes allows behaviour that we perhaps know is not respectful and I don’t necessarily mean respectful of women, just respectful of people.
Let’s all just take a check. Let’s all remember that we all have the right to express our opinion. And while- I would never invalidate any women’s experience in this building. Listen closely. Understand and just be there for each other.

ALLISON LANGDON: Yeah. And hand on heart, I hope we do see some change. We need to see it. And perhaps that starts with getting some more females inside Parliament House in Canberra. That would be a good start.
SUSSAN LEY: Always. Always.

ALLISON LANGDON: Sussan, thanks for join us this morning.

ALLISON LANGDON: We appreciate it.