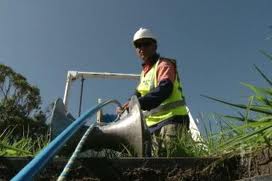 Homes in East Albury, Wodonga and West Wodonga will be among the first premises to benefit from new access to ultrafast internet, after nbn this week announced the next phase of its $4.5 billion network investment plan.

Local MP Sussan Ley said around 2,900 homes* in Albury’s east will receive the option of ultrafast fibre-to-the-premise wholesale speeds from 500 Mbps to one gigabit per second from late 2021.

“Similar to the business fibre upgrade we announced in September, I expect the rest of Albury and Lavington and other larger communities in Farrer to be included in the next round of homes and suburbs to be announced by nbn later in the year.”

“Importantly, there is no-upfront cost to the user and it’s an on-demand product; what we’re saying is if you want faster speeds here’s the opportunity,” Ms Ley said.

Victorian Senator Jane Hume said as well as the benefits of faster internet, the investment by nbn will provide an important boost to economic activity and employment on the border.

The faster nbn speeds will not be forced onto any customer – only those who order an eligible higher-tier service (NBN Home Fast, NBN Home Superfast or NBN Home Ultrafast broadband)
will be upgraded.

A number of factors were considered in selecting areas including the predicted take-up of higher speed services, while also maintaining a proportionate state and regional mix of locations. But remember If you’re getting the speeds you need today, you won’t need to upgrade.

Following completion of design and construction activity, a launch of the high-speed product is expected to commence in November 2021.