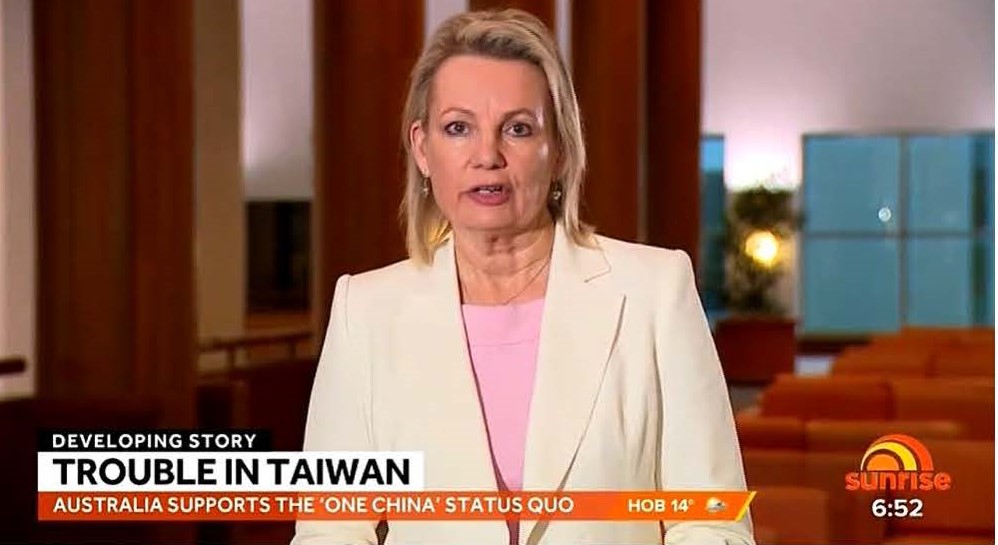 NATALIE BARR
This morning, with China beginning a series of military exercises over parts of the sea that Taiwan claims are its territory, the move is seen as payback after the visit of US House Speaker Nancy Pelosi to the self-governing island.

Taiwan’s Defence Minister says the drills amount to an aerial and maritime blockade, which is a legal act of war.

For their take I’m joined by Education Minister Jason Clare, and Deputy Liberal leader Sussan Ley. Good morning to both of you.

Jason, what message is China trying to send here…is there a risk of war?

I just repeat the point the Foreign Minister made from Cambodia yesterday, which is that we’d urge all parties to de-escalate the tension here…we want peace and stability in our region and that doesn’t include firing rockets.

BARR
Well, they have, that’s the problem…is they’re doing drills, and Taiwan says that half of these exercises are actually in our Territory – so what should China be doing here? Can we say much Jason?

CLARE
Well, what we should do is speak up for the importance of peace and stability in the region, the maintenance of the status quo. We don’t want any unilateral change to the status quo as it applies in our region…and just urge everybody here, you know, just to deescalate the tension here, because, as I said, if you’re firing rockets, there’s always the risk that they won’t land where you think they will.

BARR
Yeah Sussan, if Taiwan’s calling it a legal act of war, where does this leave Australia?

SUSSAN LEY
Well, members of governments should be able to visit other governments, and it’s quite a sensible thing to do and it’s always happened, including the current congressional visit.

So, Australia, as Jason has said, would urge China to step back and note that live firing exercises and these sorts of incursions simply increase the prospect of military misadventure, and that’s something that we absolutely do not need.

BARR
Now, Sussan you’ve accused Anthony Albanese, the Prime Minister, of being dismissive of you and your colleagues in Parliament – you claim he is gesturing with his hand and rudely shooing you away.

Jason, let’s start with you – we’ve got a bit of the shot here…you can just see the Prime Minister’s hand. What do you think of this accusation?

CLARE
Well I’ve seen politicians on both sides do gestures like that when someone’s point of order is rejected.

You know, I think Liberal Party should be very careful here about giving lectures to anybody else about the treatment of women. And if you look at Sussan in the Parliament, look behind her. It just looks like dad’s army. Sussan stands out like a cocktail bar in the Sahara in that party…

And if the Liberal Party are serious about the treatment of women, then they need to do more to get more members like Sussan onto their side of the parliament.

LEY
Nat, I don’t mind the rough and tumble of parliament, no woman in this place does. What I don’t like. is the hypocrisy…and the shooing motion…in other words, sit down and shut up, is just not something you see in any modern workplace.

And remember, Anthony Albanese came into this term of Parliament saying he was going to introduce a new respect across the Chamber, and he was absolutely going to make it a family-friendly place.

So, I will call out hypocrisy whenever and wherever I see it, particularly in this government at this point in time when, by the way, the most important issue this week was Labour’s broken promise on a $275 cut to your electricity bill.

So, we’re here for struggling families, for families who are seeing yet another mortgage hike, Inflation discussions are everywhere, and we’ve got this sort of carry on that we do not need.

We need Labor to focus on what they need to do right now for struggling families and forthe cost of living.

BARR
Ok, we’ll have to leave it there we thank you very much for your time.