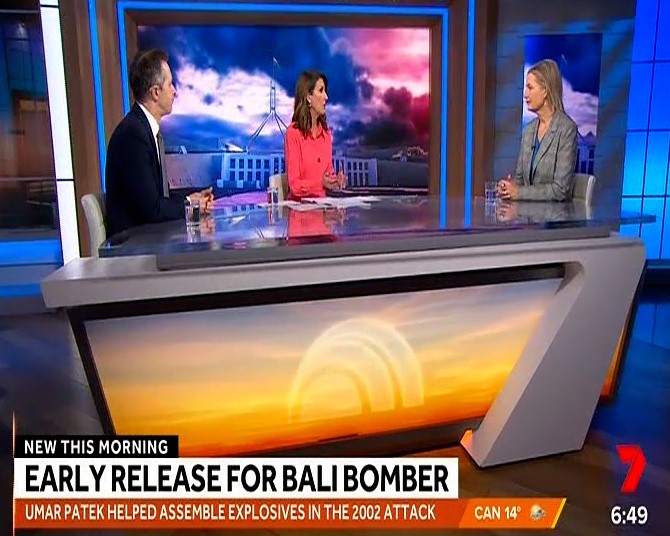 Well a man who helped assemble the explosives used in the Bali bombings in 2002 will walk free from jail early.

Umar Patek was sentenced to 20 years behind bars in 2012 for his role in the catastrophic attack that killed 202 people, including 88 Australians. He will be allowed to walk free this month for good behaviour. This October will mark 20 years since that devastating terror attack.

Joining me now in the studio are Education Minister Jason Clare and Deputy Liberal Leader Sussan Ley….good morning to both of you.

Jason this must be so distressing for so many Australians this morning. Did the Australian Government know anything about his?

Well not to my knowledge, this will be crushing news for all the mums and dads and brothers and sisters who didn’t have their friends and family come home 20 years ago.

This bloke is a mass murderer, he killed 202 people, killed 88 Australians, or at least was one of the people who made it happen. I think we all would have thought this bloke would be rotting in jail for the rest of his life.

We were at this desk, Sussan, talking a month ago want to go washing about Aussies coming back from Bali washing their shoes at the airport, 20 years ago 88 Aussies didn’t come home at all.

Now I don’t think any of us would want to see this bloke ever see life outside a prison cell.

Sussan, he almost, he could have got the death penalty….now he’s being released, not just a little bit early, for good behaviour, he’s been released ten years early, apparently because he’s been the de-radicalised, what do you say to that?

It’s just a kick in the guts for every single Australian, including the families who lost loved ones and I am sick to the stomach for those 88 Australian families of the ones who died.

And I actually think Nat, and Jason, that the Labor Party needs to make urgent representations to the government of Indonesia…to say that this is not good enough and that this needs to be fixed.

Is that something our government would consider?

Well, I’d leave that to the Foreign Minister, you know, we’ve learnt unfortunately the hard way, for example with the execution of Australians in Indonesia that they’ve got an independent legal system, they’re a country like us that makes their own decisions, but everybody waking up today would be thinking exact the same thing…

That the punishment needs to fit the crime, this bloke killed 202 people…he shouldn’t be getting out of jail.

And I think the Prime Minister waking up today needs to pick up the phone and make those urgent representations to counterparts in Indonesia. And never mind the niceties of diplomatic relationships, this is important and this matters to every Australian.

Yeh surely, I mean we’ve got the Prime Minister coming up, so we’ll obviously ask Anthony Albanese this, but surely, as Sussan said, we can pick up the phone and say we are not happy.

And I suspect that that will happen…I’m just making the fundamental point here, and we saw it when Tony Abbott was Prime Minister and we made representations about Australians that were executed there.
Even when we do that, Indonesia will make their own decisions…that doesn’t mean this is right…this bloke should rot in jail the rest of his life.

Ok, well the Prime Minister will join us after 7 o’clock this morning so we’ll definitely put that to him.
Australia’s unemployment rate has fall fallen to its lowest level in almost 50 years. The jobless rate dropped to 3.4% in July for the first time since 1974. Can you remember that?

However, the total number employed also fell by 41,000 with the amount of full-time jobs down by around 87,000 – Jason wages only rising by a tiny bit – 2.6%. How is Labor addressing that little picture?

Well unemployment going down, that’s good… but the full picture, there’s still a lot of Aussies working two or three jobs, so a low number, while its good, it conceals the fact that Aussies not are working multiple jobs and they do that, not because they want to, but because they have to.

We’re not seeing wages go up enough at the moment for more than two million Aussies on the minimum wage or who benefit from an increase in the minimum s wage, they got that boost recently…that’s a good thing,

But as Tony Burke said yesterday, if you’ve got unemployment so low and wages not responding by going up, that’s suggests that something is broken here in particular that enterprise bargaining between workers and employers is not working the way it should.

This is one of the things that’s going to be talked about at the Job’s Summit two weeks from today.

Sussan, what is the solution here…because you have, we’ve been told basically half a million jobs in this country are up for grabs…and we are doing stories every day saying that we will train you, we’ll give you $5000 sign-on bonus, but still they are going begging.

There are thousands of job vacancies…what I’m hearing from small businesses as I travel up and down the country, is they just can’t get the workforce they need.

Now we have a good proposition for the government which is to allow veterans and pensioners to work additional days and hours without affecting their pension.

And we know that we have people with a lifetime of skills built up who would be financially penalised if they took an extra day’s work. There’s the workforce, there’s part of the solution, we don’t need a Jobs and Skills Summit and all the subsequent bureaucracy that is surrounding that…this is a measure that could be adopted by the government right now.

You’re addressing that any way.

Yeh, we’re saying it’s on the stable…it’s one of the things we should look at. Cheaper childcare is a good idea as well, because you’ve got thousands and thousands of mums and dads watching at the moment who aren’t going to work because childcare’s more expensive.

They’re all skilled up ready to work to fill those jobs, if we can make childcare cheaper that’ll help as well, but there’s a lot more that we need to do.

Every business I speak to, Sussan’s right, is screaming out for skilled workers so what we do in training people up at TAFE and uni’s important…I’ve announced 20,000 extra uni spots, to try and fix this as well.

Migration’s going to be part of the mix as well, there’s no one single thing…there’s a lot that needs to happen.

It’s so important though that the migration piece, the skills piece, the training piece is done with industry and the people who run the business actually at the centre of the discussion.

I agree with you

Because what we’re seeing is that the unions are coming to the table, and they should always have a place at the table, but let’s make sure that the people who need the workforce actually get to say what they need.

Business leaders will be there at the summit, the only people that won’t be there are Peter Dutton and the Liberal Party.

Exactly and we have covered that, everyone needs to be there because this is one of the biggest problems facing the country…thank you both for your time this morning.