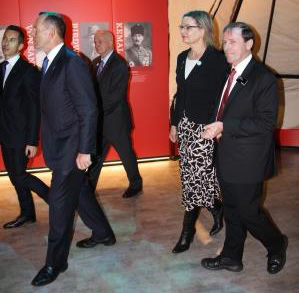 “The Spirit of Anzac Centenary Experience offers Australians living in cities and regional areas an excellent opportunity to see first-hand an extensive collection of military artefacts and interpretive materials from the Australian War Memorial,” the Prime Minister said.

An innovative partnership between the Australian Government, the Australian War Memorial and the Department of Defence, supported by the Commonwealth Bank and Telstra, is bringing the travelling exhibition to 23 locations around Australia over the next 20 months.

Commonwealth Bank CEO, Ian Narev, said: “As the country’s central bank during the First World War, we have a shared history with Australia. We are proud to support this commemorative exhibition, which honours and respects the service of so many men and women, including many who made the ultimate sacrifice for their country, and others who continue to serve today.”

The Spirit of Anzac Centenary Experience includes a community zone which enables communities in the regions visited to uncover the contribution made by local men and women – both those who served and the families and loved ones who remained at home.

Telstra CEO Andrew Penn said: “This exhibition captures a key part of Australia’s heritage and honours the generosity of spirit, the self-sacrifice, and the great character of a generation of Australians, including the many thousands of our own people who volunteered and served as signallers and engineers in the First World War. Our support for the Spirit of Anzac Centenary Experience honours the memory of all Australians who served and sacrificed in our armed forces then, and since.”

As the flagship community event of the Australian Government’s Anzac Centenary national programme, the travelling exhibition is intended to improve understanding of Australia’s wartime experience, its impact and its lessons, to carry forward the Anzac spirit and values.

Representing the Minister for Veterans’ Affairs, Minister Sussan Ley said, “Our hope is that the Spirit of Anzac Centenary Experience will start conversations that will continue long after the exhibition has concluded.”

More information, including the tour itinerary, is available at www.spiritofanzac.gov.au