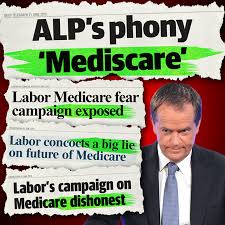 However, the reality is it does not matter who Labor appoints to the position if Bill Shorten is still their chief salesman.

Mr Shorten has been proven to be a liar when it comes to Medicare and his privatisation claims.

“there is absolutely no evidence at all that the liberal party has any desire to privatise medicare.”
– AMA President Michael Gannon – 22 June 2016 – ABC24

Mr Shorten’s post-election tour around the country only served to remind people of his determination to deceive them with Labor’s win-government-at-any-cost approach to public service.

Unfortunately for Ms King, she faces the same fate after publicly repeating Mr Shorten’s ‘Mediscare’ lie throughout the campaign.

Ms King will also have to justify her role as a member of Rudd-Gillard Health Ministry which cut over $6 billion from Medicare and medicines in government.

Then there’s Ms King’s confession that Labor would have to make deep cuts to Medicare and medicines to get the budget under control if they were in government:

“The opposition would be kidding itself if it didn’t recognise there were challenges in the budget and that savings needed to be found… there is no area that is going to be exempt.”
Labor shadow health spokesperson Catherine King – 22 February 2015 – Sky News

This is now more-true than ever with Labor making tens of billions of dollars’ worth of election promises they cannot pay for.

The Turnbull Government has a strong reform agenda to protect the future of Medicare and ensuring it remains universally-accessible to all Australians, centered around our health care home model – a new, improved way of delivering Medicare for Australians with chronic disease.

I have already made clear the Government’s intentions to work collaboratively with the Opposition and the cross bench to build a better health system for all Australians.

The ball is now squarely in Labor’s court as to whether they can put patients before politics.