Rollout timetable for more mobile base stations in Farrer announced 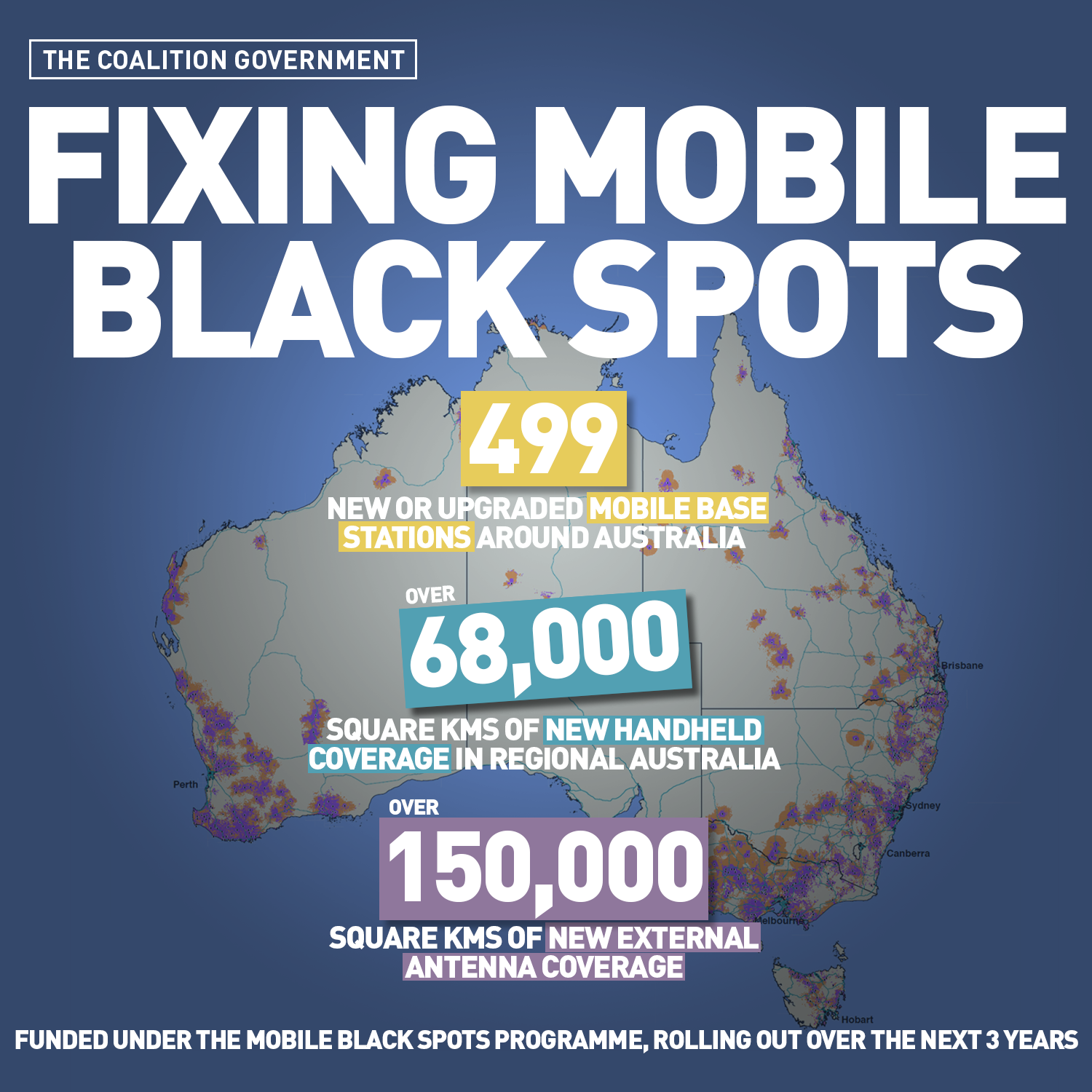 Minister for Regional Communications, Fiona Nash, and Member for Farrer, Sussan Ley, has today welcomed the announcement by Vodafone of its construction schedule for new and upgraded mobile base stations across the Murrumbidgee and Riverina regions under Round 1 of the Coalition Government’s Mobile Black Spot Programme.

Ms Ley said that new or upgraded Vodafone mobile base stations are due to be switched on across our region by the end of 2016, being part of the Coalition’s overall investment in fixing mobile black spots across the region.

In existing areas of Farrer, I am delighted that the new mobile base stations at Lowesdale and Savernake will soon be made operational and also welcome the boost to mobile coverage at Tabbita, and Gunbar, being areas moving into Farrer in coming months.

“These five towers are scheduled to be switched on during the last quarter of this year; bringing a much-needed boost to mobile coverage across our region and providing benefits to emergency service operators, businesses, and residents.

“The Coalition Government understands the importance of mobile coverage in regional and remote areas of Australia, which is why we allocated $100 million for Round 1 of the Programme and a further $60 million for Round 2,” said Ms Ley.

Minister Nash said today’s announcement was only made possible by the Coalition Government’s Mobile Black Spot Programme, first announced ahead of the 2013 Federal Election.

“As a rural Australian who has little mobile coverage on the roads to my home, I understand the issues faced by those living with little or no coverage. Although coverage is essentially dictated by the market, government can help, and that’s what the Coalition’s Mobile Black Spot Programme does. It doesn’t matter if you’re in Cargo or Cooyar, better mobile phone coverage makes life easier.

“I am proud to be part of a government that is actually delivering the services that our regions need, in contrast to Labor, who oversaw a growing telecommunications gap between the bush and our cities while it was in government.”

Round 1 of the Mobile Black Spot Programme will deliver almost 500 new mobile base stations in regional and remote areas, including eight new base stations across Farrer.

The locations of the new or upgraded base stations were selected following an extensive public consultation process which allowed residents to nominate mobile black spot locations.

These new base stations will provide new or upgraded mobile coverage to some 3,000 publicly nominated mobile black spots across Australia. The Mobile Black Spot Programme is the most significant one-time increase in mobile network coverage to regional and remote Australia delivered by a single public funding programme in the history of mobile communications in Australia.

Round 1 will see a total of $385 million invested in improving mobile black spots across Australia. The Coalition Government’s $100 million contribution is leveraged by an additional $88 million in co-contributions from the governments of New South Wales, Victoria, Queensland, Western Australia and Tasmania, as well as substantial co contributions from Telstra and Vodafone, local governments and other third parties.

Round 2 will see an additional $60 million in Commonwealth funding go towards additional base stations in rural and remote areas. A competitive selection process is now underway for mobile network operators to nominate locations where they would build new or upgraded base stations to provide coverage to mobile black spots nominated by the public. Applications are due by 14 June, with the successful locations under Round 2 expected to be announced by the end of 2016.

More information about the Programme and the rollout schedule is available at www.communications.gov.au/mobile_coverage

* Note: the locations on the rollout schedule may be subject to change. Timeframes for the rollout of new base stations may vary due to a range of factors, including local government development approval processes and community consultation periods.