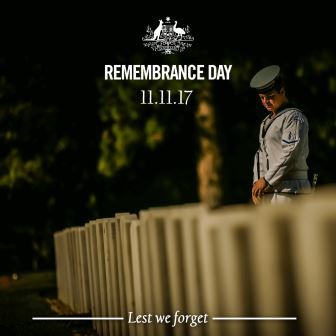 Next year we will stand again, on the centenary of that war’s ending, the first modern world conflict which saw the mobilisation of more than 70 million people and left between 9 and 13 million dead.

Nearly 300,000 Australians served in France and Belgium in World War One – 45,000 died – more than one-third of these have no known grave.

Some were relatives our families would never get to see grow old – fathers, brothers, uncles lost to battle, a future and life taken in foreign fields far, far away.

Important to remember, is that Australia did not conscript its people to fight – nearly all of our soldiers were volunteers.

That Great War, as it was known, also helped shape the unique Australian definition of ‘mateship’ – a shared experience – one based on mutual respect.

Sadly, it was not the last time we have been called upon to fight, and die, for the values which continue to define our national character.

After the end of the Second World War, the Australian and British governments changed the name from Armistice to Remembrance Day, as it was no longer an appropriate title which could honour all of our war dead.

In 1997, the Governor-General issued a proclamation formally declaring the 11th of November the nation’s opportunity to observe a minute’s silence to remember those who died or suffered for Australia’s cause, in all wars and armed conflicts.

On this day – at this time – we stand still, to reflect on more than 102,000 of our countrymen and women who have sacrificed their life, for us to enjoy the freedoms each of us experience today.