Preserving maritime history in the bush! 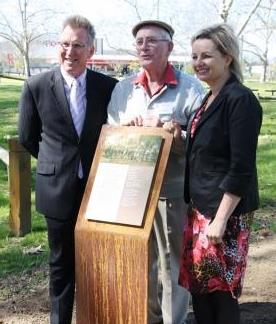 As part of the Commonwealth’s Maritime Museum of Australia Project Support Scheme, $4240 has been awarded to AlburyCity to create a series of storyboards to tell the story of the city’s unique maritime history.

The first storyboard, being put in place today (02 Sep) at the P.S Cumberoona mooring point on the Murray River, explains the tale behind naming a central Albury park after a WW1 battlefield in Western Europe.

AlburyCity Mayor Kevin Mack welcomed the funding and said he was pleased to see the storyboard acknowledge the city’s continued link to the village of Noreuil in France.

“Through Noreuil Park, Albury will always have a connection to this small French township and the soldiers who fought there. We’re working with the Albury & District Historical Society and Aboriginal community on this project and look forward to developing more storyboards in the future”, Cr Mack said.

$3895 has been awarded to the Hay Gaol Museum to commission a display case, along with development of a text and audio/visual interpretation for the historic Lake Bunumbert indigenous bark canoe.

A futher $8800 is going to Holbrook’s Submarine Museum to record their collection on to an electronic data base. This work will increase access to the collection and secure nationally significant objects.

These local projects at Albury, Holbrook and Hay are included in funding totalling $135,000
for Australia’s maritime heritage, conserving and displaying objects important to local history.

The scheme provides individual grants of up to $10,000, as well as internships and in-kind support from Australian National Maritime Museum experts. This includes support for staff
and volunteers from regional organisations to help develop educational and public programs.

In 2015-16, funding has been awarded to 19 organisations. In-kind support has been offered to 12 organisations and internships to three applicants. The next round of funding will be open for applications in February 2016.