Plibersek missteps her way back into health 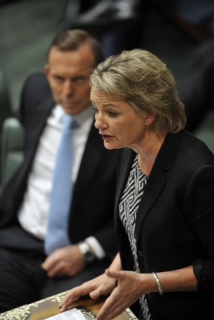 Labor Deputy Leader Tanya Plibersek has misstepped her way back into the health portfolio, forgetting she not only introduced a pause on indexation of the Medicare rebate as Health Minister, but justified it by attacking doctors’ wages.

Ms Plibersek has only begun acting in her old portfolio for Labor Shadow Health Minister Catherine King in recent days, but has already made a major blunder in trying to attack the Government on Medicare indexation, with her previous comments as Labor Health Minister coming back to haunt:

‘Ms Plibersek said she accepted some GPs would opt out of bulk-billing as a result of the freeze, but she hoped that not many would take this course of action.’

‘Ms Plibersek dismissed concerns that the freeze — which will remove $664 million from the MBS over four years — will pressure doctors to compromise care.’
Tanya Plibersek – 22 May 2013 – Australian Doctor

It is also looking like Ms Plibersek was set up for a fall by her colleague Catherine King, who clearly failed to mention Labor’s attempted claims about an ‘$8 GP tax by stealth’ had been exposed as false.

‘But internal modelling obtained by The Australian under Freedom of Information laws suggests the most common rebate, for a standard Level B consultation, would only be $2.10 lower in 2017-18 under the freeze.”
The Australian – May 15 2015 – Budget 2015: Research undermines claim of $8 ‘co-payment’

Health Minister Sussan Ley said it was clear Labor’s “Year of No Idea” in Health continued, no matter who was at the helm.

“The only health policy we have seen from Labor to date is a plan to cut the health Budget – no area exempt. That means Medicare, hospitals and medicines.

“Labor’s hypocrisy on health has reached worrying levels and today’s blunder is another example of how their skeletons from Government continue to come back to haunt them.

“In contrast, this Government is working constructively with health professionals to deliver a healthier Medicare and I look forward to receiving the results of this review by the end of the year.”

“the opposition would be kidding itself if it didn’t recognise there were challenges in the budget and that savings needed to be found”… “There is no area that is going to be exempt”… “We have to look across the board.” – Catherine King – 22 Feb 2015 – Sky News