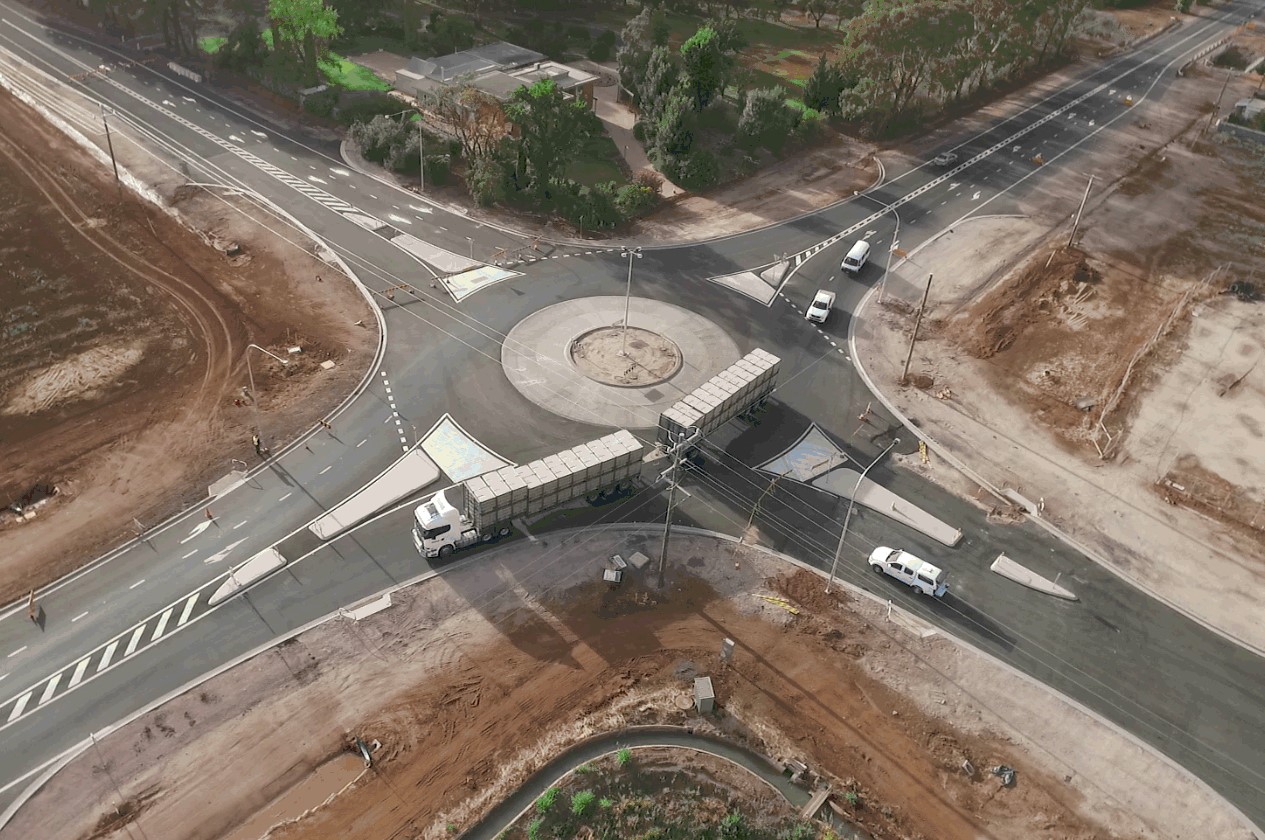 The construction of a new roundabout at the intersection of Thorne Road and Kidman Way is now complete, offering better access for heavy vehicles and a safer route for all motorists driving through Griffith.

Deputy Prime Minister, Nationals’ Leader and Minister for Infrastructure, Transport and Regional Development Michael McCormack said the roundabout was part of the $21 million Griffith Southern Industrial Link and forms Stage 2b of the project.

“The Liberals and Nationals in Government are investing to get people home sooner and safer and boost productivity, no matter where they live,” Mr McCormack said.

“That’s why we have delivered this new roundabout – a major component of the alternative heavy vehicle route around the Griffith CBD.

“This project as part of the staged construction of the Griffith Southern Industrial Link, which will provide a direct link to key inter-regional and interstate freight networks and better access for local commodity producers.”

Assistant Minister for Regional Development and Territories and Federal Member for Farrer Sussan Ley said in addition to the construction of the roundabout, Stage 2b involved widening and upgrading the existing pavement as well as relocating and installing services such as telecommunication, water, power, streetlights and drainage.

“This project is part of the Liberal and Nationals’ Government’s commitment to fund upgrades in more than 80 locations Australia-wide under Round 5 of the Heavy Vehicle Safety and Productivity Program,” Ms Ley said.

“The Griffith Southern Industrial Link will deliver a vital regional freight link along the Kidman Way from Queensland through Griffith to the Sturt and Newell Highways, Burley Griffin and Irrigation Ways.

“The Liberals and Nationals in Government are dedicated to working with local governments to provide safer road and better freight networks across the country.”

Griffith City Council Mayor John Dal Broi said the roundabout was a key component of the Griffith Southern Industrial Link (GSIL) and a significant milestone in the city’s transportation history.

“Construction will continue this year on upgrading Bromley Road and extending the GSIL to Lavender Bend,” Cr Dal Broi said.

“With the increased freight coming out of Griffith and surrounds, it is great to see infrastructure that will remove very large vehicles from our city centre.

“On behalf of Council, I would like to thank the Griffith community for their patience throughout the construction program, particularly those residents and businesses who were impacted by the one way traffic closures during construction.”

The $1.6 million Thorne Road and Kidman Way intersection roundabout was jointly funded by the Australian Government through the Heavy Vehicle Safety and Productivity Program and the Griffith City Council on a 50:50 basis.