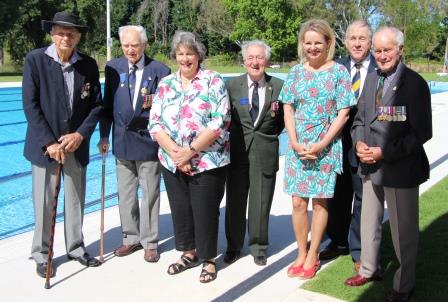 Residents of Holbrook and Henty now have access to a safer and more modern place to take a dip, with the upgraded War Memorial Swimming Pools re-opening for the summer season.

“They have also been built with access ramps, so people with disabilities or recovering from injury can easily access and use the pool for exercise and rehabilitation. I am also pleased to see these projects delivered before we get into the hottest part of the year,” Mr Chester said.

Federal Member for Farrer Sussan Ley noted both pools will remain dedicated as district war memorials, chronicling the region’s military history and ensuring the sacrifice of local servicemen and women will always be remembered.

Mayor of Greater Hume Council Heather Wilton said the project offered a welcome economic boost to the region, with 20 people employed during the upgrades.

“The extended nature of the construction meant that workers were able to participate in social and sporting activities with the local community.”

“Investment in public infrastructure such as the new pools will help the towns of Holbrook and Henty attract and retain residents,” Cr Wilton said.