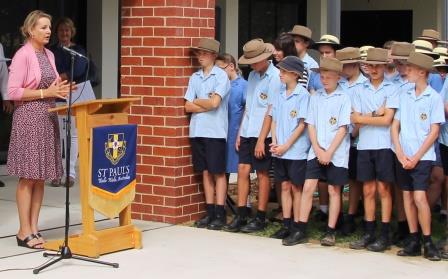 Students and staff at St Paul’s College in Walla Walla marked the opening of new building extensions today thanks to Capital Grants Program (CGP) funding from the Turnbull Government.

“I was lucky enough to be here when works first started last July; to come back and open these wonderful new rooms in time for the school’s 70th anniversary is a credit to all involved.”

“As a member of parliament I have the opportunity to visit many schools in the electorate – no two schools are exactly the same and, likewise, their needs are also different.”

A lot of research has been undertaken on creating excellent learning environments – schools like St Pauls are taking that knowledge to then grow and create the best space for their students”, Ms Ley said.

The Coalition Government provided $400,000 in funding for the $959,000 project through the Capital Grants Program, which assists non-government schools for capital infrastructure where they may not have access to sufficient capital resources.

Independent schools in New South Wales will benefit from increased funding under these arrangements, growing from $1.4 billion in 2017 to $1.8 billion in 2021, an average per student increase of 4.8 percent each year over the next four years.