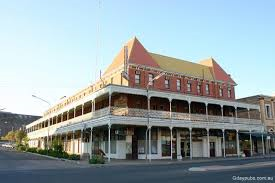 The Australian Government is proud to announce the inclusion of the City of Broken Hill on the National Heritage List.

“Australia’s Silver City, Broken Hill, is of outstanding heritage value to the nation for the significant role the city and its mining operations have played in Australia’s development towards a modern and prosperous nation,” Minister Hunt said.

“Set against a dramatic desert landscape with mountainous mullock dumps and turn of the century mining infrastructure dominating the business district, Broken Hill’s industrial heritage is central to its appeal.”

“A National Heritage listing for Broken Hill recognises over 130 years of continuous mining operations, its contribution to technical developments in the field of mining, its pioneering role in the development of occupational health and safety standards, and its early innovation and adoption of environmental regeneration in and around mining operations.”

The Minister for Health and Sport and Federal Member for Farrer, Sussan Ley said the National Heritage listing celebrates the city’s unique character and heritage.

“Broken Hill is recognised across Australia for its strong community spirit, the resilience of its people and its isolated location,” said Minister Ley.

“Broken Hill has come to symbolise the challenges and remoteness of living in the Australian outback. This symbolism and the city’s unique place in Australian society have drawn artists, writers, painters and poets to Broken Hill since its inception.”

“The community’s deep sense of place was further demonstrated in 2001 with the construction of the striking Miners Memorial that commemorates the deaths of over 800 men in the mines since 1883,” Ms Ley said.

Broken Hill City Council Mayor, Wincen Cuy, said the announcement was a major celebration for the city, and the nation.

“This prestigious citation will raise the international profile of Broken Hill, upgrade its visitor economy and provide the resilient community with momentum to endure in its efforts towards economic diversification.

“And while today’s announcement looks at our past – our National Heritage Listing is now very much about our future. Our past is our future – we have a wonderful story to tell,” Mr Cuy said.

National Heritage listing recognises the outstanding significance of Broken Hill to Australia. The conservation of Broken Hill’s historical character, and its unique outback characteristics, provide an ever present reminder of its vital mining legacy: the Line of Lode.

The City of Broken Hill is the 103rd place included in the National Heritage list. For more information visit this link .

Discovered by boundary rider and prospector Charles Rasp in 1883, Broken Hill is home to one of the world’s largest deposits of silver, lead and zinc.

The boomerang shaped ore seam–known as the Line of Lode– is up to 250 m wide and 7.3 km long, with its ends reaching more than 1.6 km underground. It continues to be mined today.

The wealth and influence of Broken Hill mining operations stretched from the isolated outback community to the South Australian coastal town of Port Pirie, the steel mills of Newcastle and the financial centres of Melbourne and London.

Mining revenues from Broken Hill were vital to the development of Australia, contributing to government administration, defence, education and research totalling hundreds of millions of dollars.

The original miners at Broken Hill, including Charles Rasp and the ‘Syndicate of Seven”, have gone on to build their operations into some the world’s largest mining companies, including BHP Billiton, Rio Tinto and Pasminco.

Broken Hill miners, engineers, chemists and scientists developed mining technology that has been adopted around the world.

Engineer Guillaume Delprat and Melbourne-based chemist Charles Potter developed a froth flotation process for the separation of mineral ores. This ground breaking process enabled the recovery of lead and zinc from existing mine tailings.

Broken Hill is where occupational health and safety provision for workers, including the 35 hour week, were first introduced.

In the 1930s Broken Hill resident Albert Morris, with the support of the Zinc Corporation, began experimenting with fencing and plantings of native species to combat the impact of dust storms. The Albert Morris ‘Green Belts’ can be seen in Broken Hill today.

Broken Hill is home to some of Australia’s popular artists including the ‘Brushmen of the Bush’ and its members Pro Hart, Jack Absalom, Hugh Schulz, Eric Minchin and John Pickup.

Iconic Australian poets like C.J. Dennis and Broken Hill-born Rae Desmond Jones have written about the place and community.

The resilience of the Broken Hill community and the strong connection to their city is reflected in the city’s public art, memorials and murals.