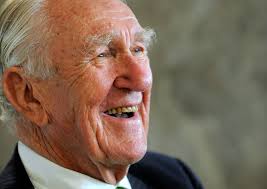 “Malcolm Fraser was a unique combination – principled and a pragmatist – always determined, whatever stance he took.

He could disgruntle some, more likely because he was not locked into a particular stream of thought or philosophy.

In recent times I worked with him as a fellow member of the advisory board of the Centre for Arab and Islamic Studies at the ANU.

He consistently presented as a decent human being who believed in decency towards humanity.

I believe this will very much be his legacy.”