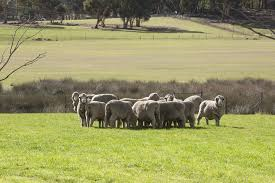 The issue of ending Live Sheep Exports can be confusing.

Is it about more space for the sheep as they travel and their treatment on arrival?  Is it a campaign driven by animal activists? Is it important for them to be killed locally to meet halal requirements? Are live sheep needed because the countries where they are going have no refrigeration? If this trade is stopped will there still be markets for Australian sheep meat?

Graphic images recently made us aware of the cruelty involved in the trade.

Over 3 million sheep haven’t been able to survive the three week journey, and many others suffer in the extreme heat and humidity.

The notion of denying sheep ready access to food, water and rest for up to a month at sea would be abhorrent to them. It’s only this year that we’ve had a ‘window’ into life on a sheep ship. Farmers, like the public, have been deceived about the conditions of the trade.

The fact is; it’s not animal welfare that has driven the steady decline in live sheep export numbers. Commercial and cultural dynamics, plus middle-eastern airlines operating out of Australia have changed everything.  From a high of six million live sheep, exported in 2002, to just 1.8 million last year, the live sheep trade now represents only six percent of the total sheep ‘turn off’ (sheep slaughtered for food) in Australia.

The Middle East is transitioning away from live sheep.

Statistics from the Department of Agriculture and Water Resources (DAWR) show an 80% increase in imported sheep meat over the last ten years.

Bagged fresh lamb has been the real game changer, helping increase Australian exports of lamb to the region by 800% in twenty years!  Whole large lamb carcasses are put inside a netting bag and airfreighted in the bellies of passenger aircraft, taking 24 hours to travel from the meat processor in Australia, to supermarkets in Kuwaiti air conditioned shopping malls.

Australians eat very little mutton but our exports are booming, up 31% in April, from the same period last year.  Consumers in China, Japan and Malaysia are seeking us out.  Every single part of the sheep processed in Australia, including skin, offal and bones has a value and a market.

99% of Gulf States consumers have refrigeration, and Australian halal accreditation is accepted all over the Middle East, so these arguments in support of live trade are unfounded.

Budget deficits are driving Middle Eastern countries to phase out their food subsidies.  When Bahrain’s subsidies ended, Australian live sheep imports dropped to zero and were replaced, not by the skinny goat-like sheep from Africa, but by chilled and frozen mutton and lamb from Australia.

This state’s agricultural sector has previously sounded the alarm about low flock numbers, pointing out the need to meet export markets in a hundred countries.  DAWR confirmed last week that WA’s eight abattoirs, which processed 3.7 million sheep last year, have the capacity to process an additional two million.

Our live sheep exports depend on Kuwait, a desert kingdom south of Iraq, which recorded a world record temperature of 56 degrees in 2016. Average temperatures during July and August hover around 46 degrees.  On arrival, after their stressful journey, Australian sheep are slaughtered fully conscious and the meat delivered to refrigerated supermarkets where they are displayed next to a superior product that has been airfreighted from Australia.

So what keeps the live sheep trade going?

Food security in a country that consumes 120kg of meat per person (Australia’s total is 90kg) is often cited, alongside a preference for ‘fresh’ as a reason for the trade. These suggestions obscure the real motive.  The company’s activities and mission statement make clear their objective is to build a processing and manufacturing empire that delivers live and processed Australian sheep to customers in other Gulf States.  Al Mawashi is in fact Australia’s major competitor in our most important sheep meat market – and we are supplying the sheep that make them competitive!

While Al Mawashi’s CEO is understandably using every trick in the book to keep this supply, the same CEO stated in Kuwait’s 2017 Economic report:

“Alter­native “countries of sheep origin” such as India, China, or Ethiopia pose additional challenges. These do not only comprise higher shipment costs, but also an increased likelihood of live­stock illnesses, having arisen from less sophis­ticated food infrastructures in the countries of origin.”

Australia has the quality and volume of sheep meat that Kuwait requires and is already accepting.  The decline in Australian live sheep numbers to Kuwait has been mirrored by an 80 % increase in sheep meat exports to Kuwait since 2010.

Meat and Livestock Australia employees in the Middle East have for decades been serving two masters. Live exports and sheep meat exports.  It should be a dream job to promote the quality and benefits of Australian processed halal sheep that can be delivered-to-requirements either overnight or by sea.

Moving away from the live trade is not straightforward for West Australian farmers. Some will have to adjust their farm programs: meaning different timetables, perhaps a different mix of cropping, wool and sheep. Additional feedlots may need to be developed and a reliable labour force put in place.  Hence, my call for a transition of five years.

Yes, state and federal governments will need to assist – not with compensation – but with a package of measures to facilitate willing investment, better working and skilled visa categories, as well as helping to lock in existing and new trading partners.

The market opportunity for Australian grown meat in the Middle East and indeed the world continues to climb. Our quality and standards are trusted and admired. So it is vital that we do not put at risk 94.1% of our vibrant and growing lamb and mutton industry for an overseas product, identified as Australian, with the potential to seriously damage our brand.

Producing food and fibre in the 21st century requires ethics and sustainability.  The live sheep trade to the Middle East has neither.

Let our farmers lead the way.