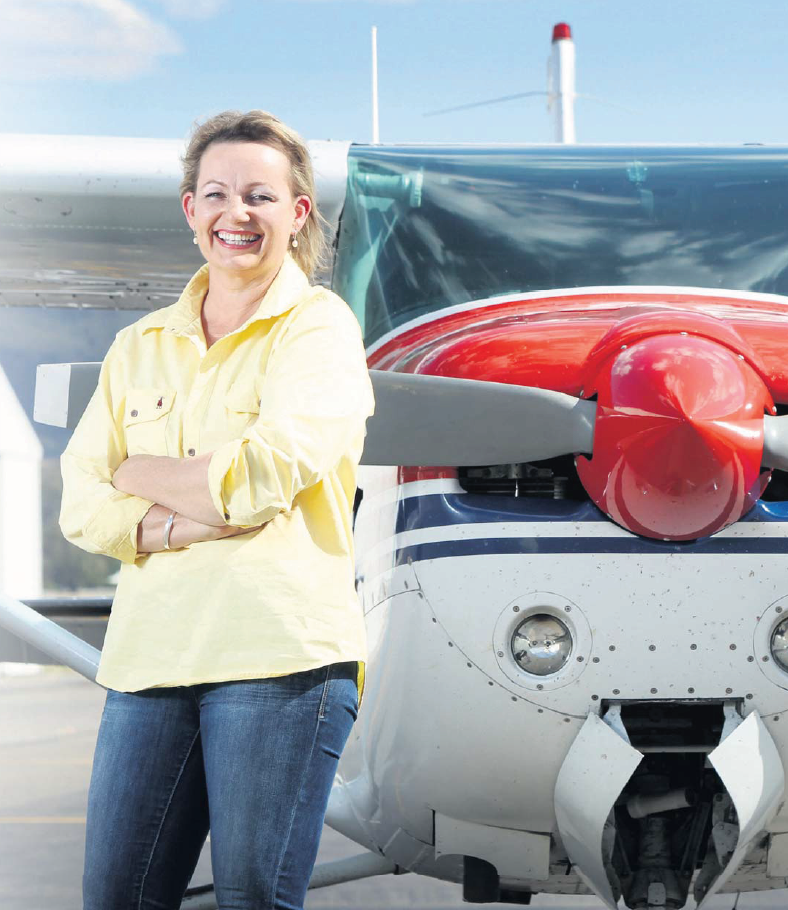 SUSSAN Ley would just love some time to grow her own vegetable garden. And return to her passion of horses. Maybe even spend more time in the air – not the rarefied air of Canberra, just up in the clouds in a plane, where no-one bothers you. But right now, hankering for the quiet life does creep into this Federal Minister’s hectic schedule and the garden and horses are the things she most misses.

To be blunt, the 54-year-old has a lot on her plate. Managing the nation’s health, sport and aged care policies is a difficult juggling act. Never mind the fact Sussan is also representing an electorate twice the size of England. But after 15 years in Federal Parliament, the Member for Farrer is showing no signs of slowing, let alone stopping.

“I love the ability to make a difference every single day,” Sussan said.

“It’s not always the difference you want to make, but I wouldn’t be here if I didn’t feel like I could make that difference. “It is certainly what keeps me going and I’ve only become more enthusiastic about the role over the years.” Even if that means the qualified pilot misses out on her favourite pastimes. Sussan does not own a plane but occasionally hires one made in 1979, the same year she left school.

“As a minister I don’t have much spare time to be honest,” she said. “But most people who know me understand my passion has always been aeroplanes. If I had spare time, I would probably take myself flying.”

IT IS often said politicians never dreamt of a tilt at parliament until the opportunity arose, but a look at Sussan’s life and the example is more pronounced than usual.

Born in Nigeria to English parents, Sussan spent most of her childhood on the move. At age one her family moved to the Emirates, regularly shifting between cities due to her father’s role with British intelligence. When she was 10, her parents sent her off to boarding school in Sussex while they remained in the Middle East.

Then, when Sussan was 13, her family decided to migrate to a hobby farm near Toowoomba in outback Queensland. It was here where the adjustment was perhaps most difficult.

“I went to an ordinary public school in Toowoomba,” she said.

“Most people laughed at me because of my accent and I didn’t make many friends.” She admits the constant upheaval as a child was also challenging, but it helped shape her into the person she is today.

“I think those experiences have probably given me resilience when times get tough, and an understanding that you rely on yourself to solve a problem, because that’s effectively what I’ve always had to do,” she said.

But it was a brief punk period later on in Sussan’s teenage years – when her family had again shifted, this time to Canberra – which paints a picture of a person who is as far removed from the stereotypical parliamentary bureaucrat as you can get. An extract from a post on the NSW Migration Heritage Centre has Sussan detailing her ensemble one day featuring no shoes, tinted bright orange glasses, spiky purple hair and a dog collar around her neck.

“At that time of my life I never thought being a politician was an option for me,” she said.

“All I dreamt about at that age was being a pilot.” Sussan’s interest in politics did not take shape until much later in her life.

After experiencing a range of jobs including as an air traffic controller, department store cleaner and a shearer’s cook, she eventually decided to sign up for university. It came at a time she, her then-husband and their three children were living on a family farm outside Tallangatta in north-east Victoria.

“I went to university at age 30 to educate myself because I knew if I didn’t get an income, the family farm wouldn’t survive,” she said.

“And those very tough years on the farm gave me a determination to represent rural communities I saw as not having enough of a voice in the political debate.”

SUSSAN is one of just six women in a very large and blokey Cabinet. If that sounds seriously skewed in the male dominated higher echelons of power it’s actually getting crowded compared to when Sussan was promoted to the ministry 18 months ago.

“I was the second woman in the Cabinet in this government,” she said.

“It was quite a strange feeling when it was just me and Julie Bishop for a few months.”

But despite the experience of Julia Gillard in Australia’s top job – where criticism of her work occasionally featured hints of sexism – Sussan believes more women should consider a career in Canberra.

“I don’t see politics as a nasty place, or as nastier than any other profession,” she said.

“It was also a tough job working in the shearing sheds. I was a shearer’s cook for three years, but I also worked on the board picking up fleeces.”

But perhaps the toughest job for Sussan is trying to represent the interests of an electorate spanning 247,097 square kilometres, from Albury in the south-east to Broken Hill in the north-west.

The electoral boundaries have been redrawn ahead of the next election, and although the size will drop, Sussan admits it’s still very big. So how does she try and keep her constituents happy while also managing three portfolios?

“Social media, email, telephone and keeping in touch in those ways when I can’t be somewhere is absolutely vital,” she said.

“When I went into politics, we didn’t have any smartphones. We sent out newsletters, but we didn’t have mobile email, so it was very hard to keep in touch while on the move. But now it’s just another world.

“Having said that, it is still a challenge to be in three places at once. It is something I constantly battle with and is one of the reasons I am really looking forward to the campaign. I won’t have to be Health Minister every day. I can be a local candidate.”

(She assured the Riverine Herald her campaign will feature at least one visit to Moama.) But Sussan said her ministerial responsibilities can actually be a blessing for voters in Farrer, who rarely see her in person.

“Being in Cabinet gives me all the influence I believe I need to argue for my electorate,” she said. “Consider the fact I can walk across the hall and speak to the Environment Minister or the Agriculture Minister. I can sit across the table from the Education Minister. When an issue comes through, I am able to escalate it to the top of decision-making quickly.

“That’s something you don’t have if you’re not in the ministry.”

FROM the outside, it seems Sussan has reached a high point in her political career. With three ministerial titles, 15 years under her belt in parliament and another term a near-certainty, where does the former punk rocker go from here? Asked where she sees herself in 10 years’ time, Sussan revealed she had no plans. After all, when you’ve experienced a diverse life constantly on the move, who would predict where they are that far down the track?

“I’ve never seen myself that far ahead and I probably won’t start now,” she said.

“My life has never been a plan. I have never set goals. Students are told to set goals; I tell them don’t set any goals. Do the things that mean the most to you at the time; and then if you need to change direction – change it. “I’m not going to plan a political career assuming I’m going to be here, but I always promise myself that if I ever wake up and thought it’s just another day at the office, and if I ever think I can’t make a difference, then it’s time to leave.

“But I haven’t felt that yet.”