Hep C cures available today for as low as $6.20 a prescription 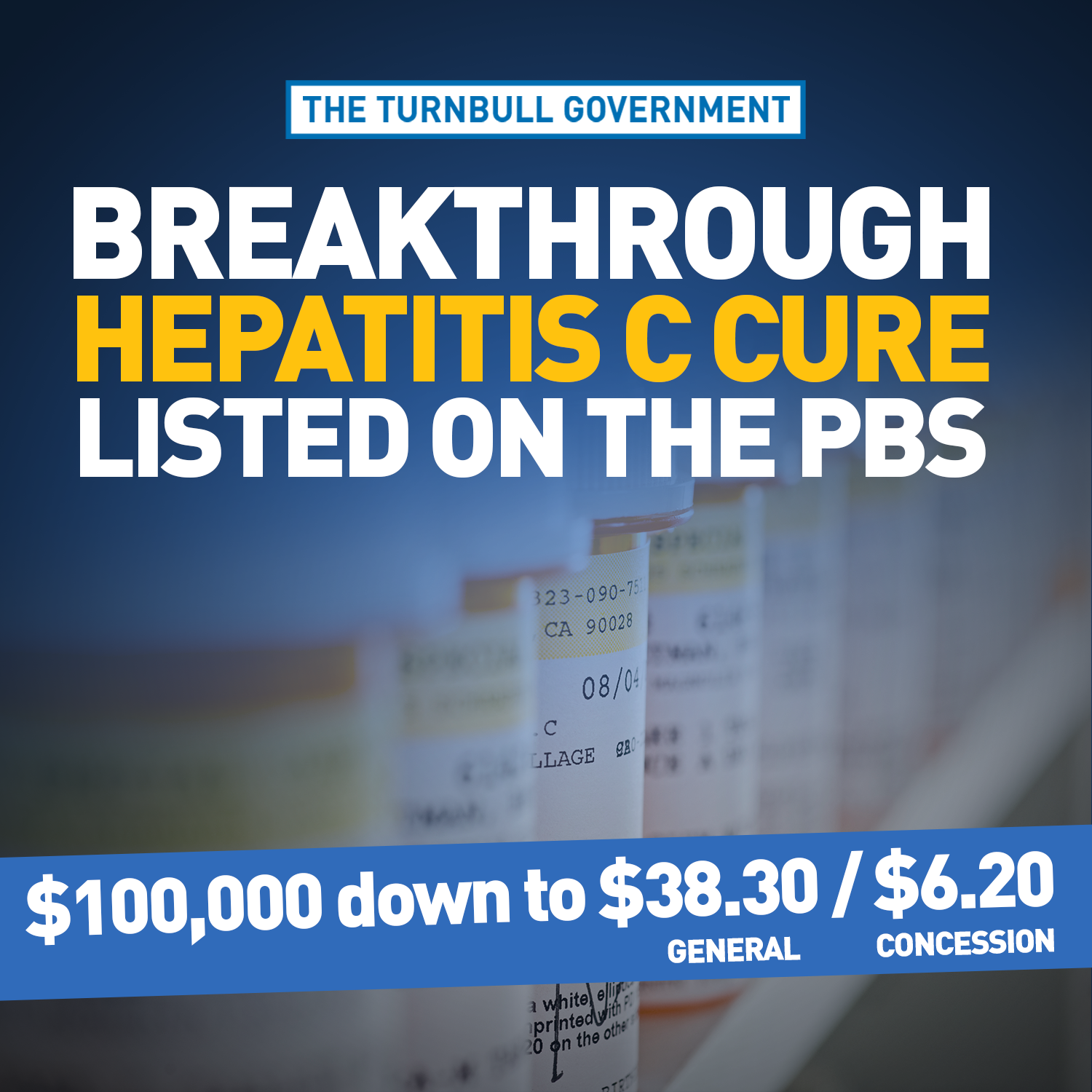 Hepatitis C sufferers will today get access to publicly-subsidised breakthrough cures that could eradicate the deadly and debilitating disease within a generation, thanks to an investment of more than $1 billion by the Turnbull Government.

Minister for Health Sussan Ley announced Australians with Hep C would now pay just $6.20 a prescription if they were a concession card holder or $38.30 a prescription as a general patient for four different cures listed on the Pharmaceutical Benefits Scheme today – saving patients as much as $100,000 for treatment.

Ms Ley said that when taken as prescribed, the four breakthrough medicines listed today had a cure rate of over 90 per cent and worked faster and with fewer side effects than anything else previously subsidised on the PBS.

“Australia is one of the first countries in the world to publicly subsidise these cures for every one of our quarter-of-a-million Hep C suffers, no matter what their condition or how they contracted it,” Ms Ley said.

“This is a watershed moment in Australian history and we are hoping to eliminate one the great disease challenges facing Australia in the 21st century.

Hepatitis C is an infectious blood borne virus that attacks the liver, causing its inflammation, and may lead to cirrhosis, end-stage liver disease, liver cancer and, in some cases, death. It has six different genotypes.

Ms Ley said there were about 700 deaths attributable to chronic Hep C infection each year, with thousands more suffering a variety of serious liver diseases and conditions.

As a result deaths from primary liver cancer, for which untreated Hep C is a major driver, are rising faster than for any other cancer, with Ms Ley describing today’s PBS listings as a “game changer”.

“Essentially one in every 100 Australians has Hep C, with another 10,000 people diagnosed every year, and they come from all walks of life,” Ms Ley said.

“With this announcement there is great hope we can not only halt the spread of this deadly infectious virus, but eliminate it altogether in time.

“It’s therefore important we tackle this disease head on, and that includes providing these medicines to all Australians, particularly vulnerable populations where rates of infection are high.”

Ms Ley said today’s announcement would see the listing of multiple drug combinations to ensure cures for all types of Hep C were made available to the entire patient population through the PBS from March 1 2016. The medicines are: Sofosbuvir with ledipasvir (Harvoni); Sofosbuvir (Sovaldi); Daclatasvir (Daklinza); and Ribavirin (Ibavyr).

Ms Ley said in the majority of cases the medicines would be taken orally, with treatment duration as short as 8 to 12 weeks.

Ms Ley said the cures would be administered in line with the Australian Government’s broader 4th National Hepatitis C Strategy.

Ms Ley advised people with Hep C to consult their doctor about the best course of treatment for them.

These Hep C cures were part of $1.6 billion the Turnbull Government invested in its recent MYEFO update.

“The Turnbull Government is committed to listing medicines recommended by the PBAC without fear or favour, unlike Labor, who tried to halt listing new drug recommendations until it returned budget to surplus,” Ms Ley said.

“As such, the Coalition has now approved over 900 new and amended listings to the PBS since coming to office – nearly triple the 331 new listings in Labor’s final term.

“Every dollar spent on inefficiency in the health system is a dollar we cannot invest in new breakthrough cures like this one.”