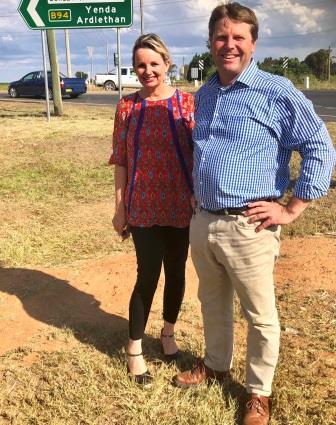 Community members in Griffith and the Murrumbidgee Irrigation Area can now access public feedback on the about the local Yoogali Intersection Upgrade.

“The Yoogali intersection is the meeting point of four major roads in Griffith and has long been the subject of safety concerns for the local community, so public feedback is essential in ensuring we deliver for the community.”

NSW Minister for Roads, Maritime and Freight Melinda Pavey said that the Liberals & Nationals had worked with the local community to ensure a clear understanding of how improving traffic performance and heavy vehicle access at the intersection would improve safety for all road users.

“The Liberals & Nationals are committed to working with residents to minimise impact, and deliver the best balance of community needs” Mrs Pavey said.

Federal Member for Farrer Sussan Ley said work on the Yoogali intersection upgrade was expected to start early next year.

“The next step ahead of construction starting on the bridge, involves relocation of power lines and underground utilities,” Ms Ley said.

“We invite all road users and residents to see the submissions report summarising the comments, responses, changes to the proposal and details of the environmental measures and safeguards.”

State Member for Murray Austin Evans said the State and Federal Liberal & Nationals Governments are working together to make country roads safer around the region.

“No matter where you live or work, the Liberals & Nationals are working together in State and Federal Government to make our roads safer and ensure you can get home to your family sooner and safer,” Mr Evans said.

“This is just another example of investing to make country roads safer.”

This $8.8 million project is jointly funded by the Australian Government under its Heavy Vehicle Safety and Productivity Program and the NSW Government.

To see the review and for more information about the Yoogali Intersection Upgrade, visit the RMS website.