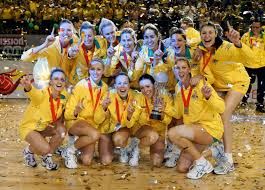 I would like to congratulate our world-conquering Diamonds on behalf of all Australians following their hard-fought victory in this afternoon’s 2015 Netball World Cup Grand Final.

Our netballers have long been a unifying force in Australian sport, as well as an inspiration to generations of women, young and old.

Our newly-crowned world champions – led by Lisa Alexander and Laura Geitz – have today continued this proud tradition, taking their third consecutive Netball World Cup title and their eleventh in total.

To do it on home soil in front of a sell-out home crowd makes it even more special for our girls and guarantees their win will go down in Australian sporting folklore for many years to come.

I would also like to congratulate New Zealand on not only making the Grand Final, but for their gallant efforts that ensured the match was a thriller right up until the final whistle, as well as all other nations who participated and did their countries proud.

Today’s win completes a successful 2015 for international sporting events on home soil with our netballers now joining our footballers and cricketers in delivering a trifecta of major tournament wins for Australia.

It also continues to cement Australia’s reputation as a world-class host of major sporting events, with vocal support all week and a record attendance for today’s Grand Final.

I would also like to take this important opportunity to capitalise on the success of our netballers and convert it into more Australians taking up the sport and getting active on the court.

In particular, those schools interested in having their students try netball can register with the Abbott Government’s landmark $100 million Sporting Schools programme here: sportingschools.gov.au.