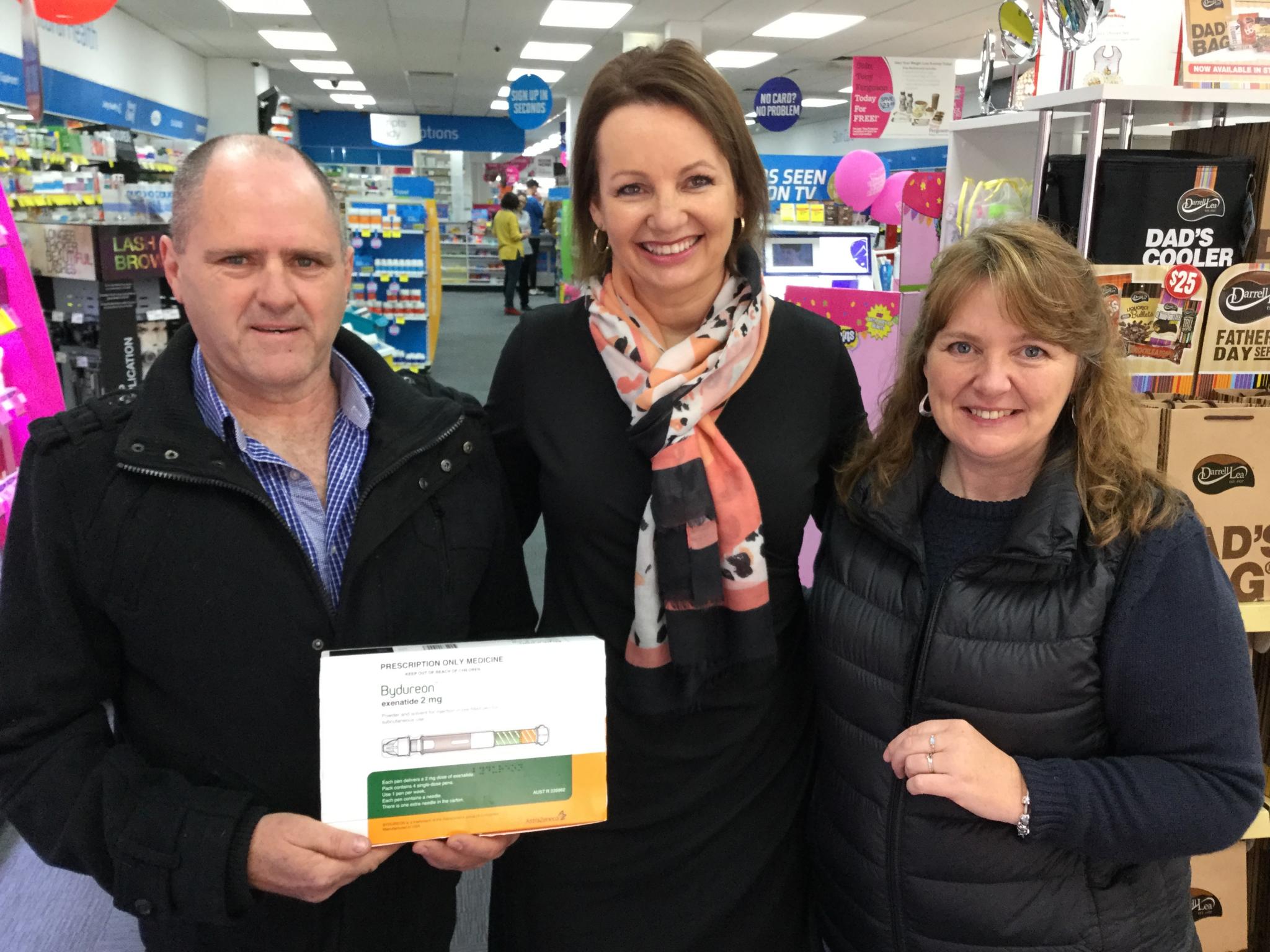 As many as 20,000 Australians living with Type 2 diabetes will find it easier and cheaper to manage their condition every day thanks to the Turnbull Government subsidising another $70 million round of new revolutionary medicines that will also help save the lives of women with advanced cervical cancer.

Minister for Health Sussan Ley announced the September 1 2016 listings on the Pharmaceutical Benefits Scheme (PBS), which take the Coalition’s total investment in listing new medicines to $4.5 billion since coming to office.

Ms Ley said the listing of revolutionary new diabetes treatment Exenatide (Bydureon®) would see patients only having to inject themselves once a week, rather than twice a day, meaning they will avoid up to 13 injections per week. Patients will also save over $1600 per year, she said.

“As one of our most prominent chronic diseases, Type 2 diabetes is placing a significant cost on the nation’s health and finances at nearly $1 billion per year,” Ms Ley said.

“According to Diabetes Australia there were about 4000 amputations last year that could have avoided with better daily management of a patient’s condition. Our hospitals also saw over 900,000 diabetes-related admissions.

“Subsiding innovative medicines like these makes it easier for thousands of patients to keep on top of their diabetes and better manage their medication, while not only saving them time and money, but also the health system.

“It will particularly benefit indigenous Australians, who are five times more likely to die from diabetes-related causes than non-Indigenous people.

“These new diabetes treatments complement our commitment to improving primary care through our landmark Health Care Homes initiative – a better way of delivering Medicare for Australians with chronic illness.”

Linagliptin (Trajenta®) and linagliptin with metformin (Trajentamet®) as well as vildagliptin (Galvus®) and vildagliptin with metformin (Galvumet®), for use in triple oral therapy, will also be made available under the new September listings, providing patients with additional treatment options for Type 2 diabetes mellitus. These drugs are used to lower blood sugar levels in patients with Type 2 diabetes and can be used on their own or in combinations.

Ms Ley said in further good news for taxpayers, these new diabetes treatments were all expected to be cost neutral as they were an alternative to existing treatments – demonstrating the Coalition’s commitment to also ensuring medicines on the PBS are kept as up-to-date as possible.

However, Ms Ley said the Turnbull Government was also balancing this innovative approach with continuing to list expensive medicines without “fear or favour”, including $60 million to list Bevacizumab (Avastin®) on the PBS for the treatment of persistent, recurrent or metastatic cervical cancer where surgery or radiation is not a viable treatment.

“This announcement will help save the lives of over 200 Australian women who aren’t responding to conventional treatments for their cervical cancer and therapy and was previously out of reach at $55,000 per course of treatment. They will now pay just $6.20 per script if they’re a concessional patient or $38.30 if they’re a general patient.

“It is the same for patients suffering from Acromegaly – a rare condition caused by an overproduction of growth hormone by the pituitary gland which can lead to abnormal growth of the hands, feet and face, with our $10 million investment in listing Pasireotide (Signifor®) helping subside a treatment that would otherwise cost them $50,000.

“However, these breakthrough medicines also come at a significant cost to taxpayers and we must be able to pay for them.

“Australians must never forget Labor blocked access to millions of dollars of breakthrough medicines because they couldn’t afford to the list them on the PBS. We must avoid Labor’s critical error at all costs.

The above medicines will be available on the PBS from 1 September 2016. Visit www.pbs.gov.au.