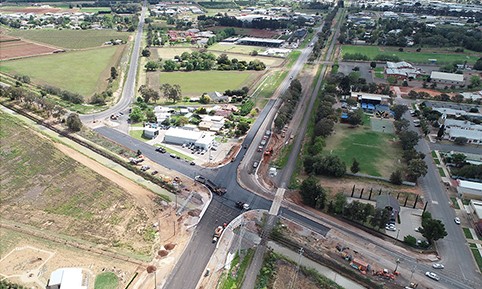 A local workforce has delivered a major upgrade at the intersection of four major roads at Yoogali ahead of schedule.

Federal Member for Farrer Sussan Ley said priority was given to sourcing local goods and services to work on the intersection upgrade at Burley Griffin Way, Irrigation Way, Mackay Avenue and Kurrajong Avenue, east of Griffith.

“The upgrade has been delivered under budget and ahead of schedule, to create a safer, wider intersection at Yoogali for all road users,” Mrs Ley said.

“The project has proven to be a huge boost for the area’s economy in what has been a challenging year, engaging 32 local businesses and 65 local construction workers to ply their trade on the upgrade.

“Almost 100 people worked on the project, with those from out of town providing a further boost to local accommodation providers, eateries and shops.”

Parliamentary Secretary to the Deputy Premier Steph Cooke said the project had not only used local labour but local materials.

“More than 650 tonnes of concrete was locally sourced for the new bridge on Irrigation Way, along with 6600 tonnes of quarried material to reconstruct the intersection,” Ms Cooke said.

“About 4000 tonnes of existing road excavated during construction of the intersection upgrade was recycled and used to improve 1.5 kilometres of local roads.”

Ms Cooke said the work included the rebuild of the railway level crossing and signals, construction of a new bridge on Irrigation Way, widened approach legs to the intersection and the installation of traffic lights.

“We know how important this intersection is to the community – they wanted an upgrade that would improve traffic and heavy vehicle access as well as limit queuing over the level crossing and we did extensive planning to make sure we met these needs and delivered an upgrade to be proud of,” Ms Cooke said.

“While there were a number of detours as the upgrade was taking place, work was able to progress as quickly as possible to limit long-term impacts on residents and road users in the area.”

Information about the Yoogali Intersection Upgrade is available here.