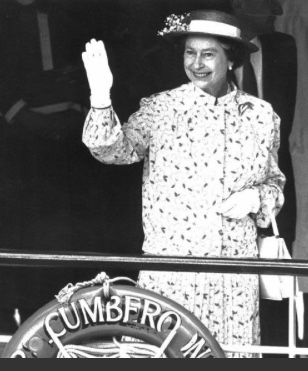 ‘The passing of Queen Elizabeth II is tremendously sad for the world.

It is a day many of us simply did not believe would arrive.

But sadly, arrive it did.

The second Elizabethan Age encompasses the most significant decades of human history.

It is hard for us to fathom the breadth and pace of change, throughout the Queen’s life.

The Queen’s reign spanned Prime Ministers from Winston Churchill born in 1874 to Liz Truss, sworn in days ago, born in 1975.

15 British Prime Ministers, 14 Presidents, and 16 of our own leaders.

The Queen was a bridge between the 19th and 21st centuries, a living connection to the trials of our past.

Crowned at just 25 years of age, called by fate, to a duty unexpected, she weathered the winds of change.

A member of the Greatest Generation she lived through the battle to defeat fascism, serving as part of the Auxiliary Territorial Service.

She saw the rise and fall of communism and lived through the spectre – and prospect of – nuclear Armageddon.

She helmed the monarchy through a world rapidly connecting and digitising and led the Commonwealth as it democratised and evolved.

In the final years of her reign, she kept her people together through a pandemic.

For 70 years she gave unfailing public service to the people of the Commonwealth.

Indeed, she discharged her duty with such eloquence, commitment, and consistency we have taken her presence well and truly for granted.

Because behind that Crown was a mother and a daughter.

Behind the Crown was a woman who loved and who lost.

Behind the Crown was a woman who had fears, who had hopes, and who had dreams.

We cannot forget what made Queen Elizabeth II remarkable was not her title, it was who she was.

The loss we are speaking about today is not about changing anthems.

It is not about changing coins or public holidays.

It isn’t about proclamations or coronations.

In our own Australian way, today we acknowledge the remarkable woman the Queen was.

Today is about recognising everything the Queen meant for so many Australians.

Because for so many of us we have lost someone who was a constant companion as we have travelled our own journeys through life.

From those yearly Christmas messages of hope, to those shared experiences of national commemoration, or her consistent concern and attention for those Australians affected by fires, floods and drought—the Queen has been there.

She played a starring role in so many of our big national moments.

From her first visit in 1954 attended by 70 per cent of Australians, to the opening of the Sydney Opera House or indeed to inaugurate this very Parliament – she is imprinted on our national memory.

But it was not just those great national moments.

It was the many thousands of memories made on her travels across our wide brown land.

In my own electorate in 1988, on her visit to Albury, she was welcomed by the entire town and was to cruise the Murray on the historic paddle steamer Cumberoona.

Alas once aboard, the Murray River wasn’t full enough to transport the vessel.

The Newspapers carried the headline Royals all steamed up with nowhere to go, paraphrasing Captain Frank Tucker who also said “it’s a real pain in the butt, but … you can’t argue with nature”.

We now know the Queen and her husband found these sorts of hiccups quite enjoyable and I am glad Deputy Speaker her visit to Albury would have been a memorable one.

Another unique connection from my community was master milliner Freddie Fox who hailed from the humble town of Urana in the Riverina.

In all Fox made more than 350 hats for the Queen over a 35 year period, surviving, as he put it, “three tailors, four dressmakers, and two designers”.

At one stage he was creating hats not only for her majesty, but also for Queen Elizabeth the Queen Mother, and for Diana, the Princess of Wales.

Deputy Speaker, like so many Australians my experience of the Queen was a brief glimpse and a short conversation.

I met the Queen with my daughter Georgina at a reception held in the Great Hall of Parliament House in 2011, during Julia Gillard’s prime ministership, it was a special moment for us all.

It is so fittingly captured by the address she made in April 2020 at the height of the COVID pandemic.

We have indeed lost one of the most substantial world figures of our time.

Thank you, Your Majesty, for everything.’