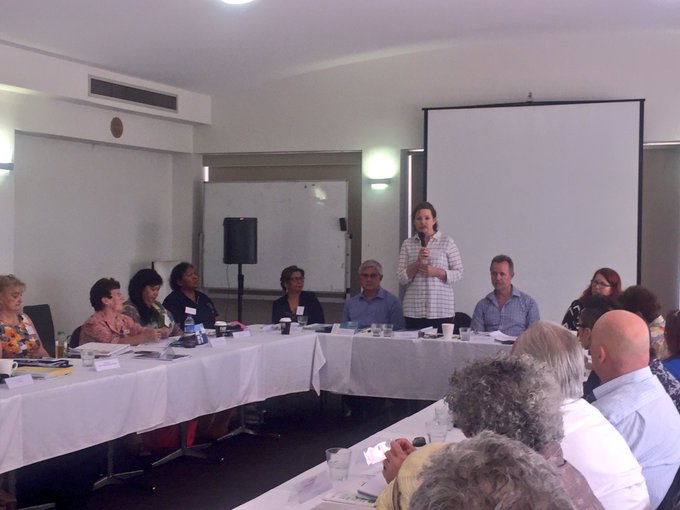 A high-level Roundtable discussion today on Aboriginal and Torres Strait Islander suicide in the Western Australian Kimberley region, chaired by Federal Minister for Health, Sussan Ley, emphasised the need for local, Indigenous controlled responses to the escalating rates of suicide in the community.

The Prime Minister, Malcolm Turnbull had committed the Government to this Roundtable discussion with key stakeholders in the Kimberley to understand what is working in the region and what is not and to find some agreement on ways to help shape a new landmark suicide prevention trial in the Kimberley.

The Kimberley region has been selected as an initial site for a suicide prevention trial in recognition of the high rate of suicide in the region, particularly in Aboriginal and Torres Strait Islander communities. In the Kimberley, the age-adjusted rate of suicide is more than six times the national average.

Minister Ley was joined by Indigenous Affairs Minister, Nigel Scullion, and Assistant Minister for Health and Aged Care, Ken Wyatt, who is an Aboriginal man from Western Australia.

Delegates to the Roundtable were given an advanced copy of the Aboriginal and Torres Strait Islander Suicide Prevention Evaluation Project (ATSISPEP) report, which was discussed by the project director, Professor Pat Dudgeon.  The report evaluated the effectiveness of existing Aboriginal and Torres Strait Islander suicide prevention services and programs and makes a number of recommendations that emphasise the need for community and culturally sensitive involvement in any suicide prevention activities. It was agreed that the recommendations of the Report form a blueprint for the suicide prevention trial and that the ATSISPEP Evaluation tool be used and implemented to guide the PHN and Kimberley Suicide Prevention Trial site.

It was agreed that the next step is to establish a Working Group consisting of representatives from local organisations as well as Commonwealth and State Departments with the assistance of the Federal Department of Health to develop the next action items for the trial.

Minister Scullion also committed to returning to the Kimberley region in December.

Ministers undertook to hold further consultations on these matters with the local Aboriginal community and other stakeholders in the Kimberley region.