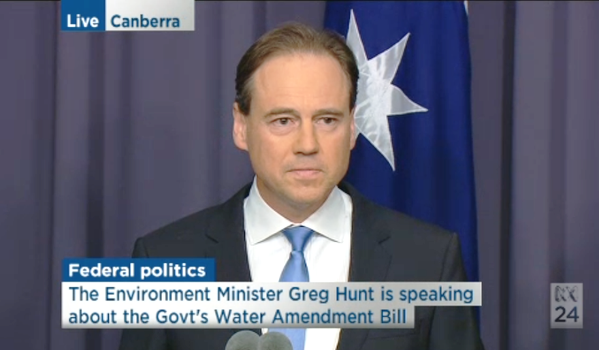 The Government and Australia has moved closer to achieving the long-term sustainability of agriculture and the environment – which is at the heart of the Murray Darling Basin Plan.

The Government has delivered on a key commitment with the Water Amendment Bill 2015 passing through the Senate today.

The Murray Darling Basin is the food bowl of the nation – generating close to $19 billion a year.

Water is the lifeblood of Basin Communities and this Bill has delivered certainty, while we continue to meet the environmental outcomes of the Basin Plan.

The 1500 gigalitre (GL) cap on water purchases was a key pre-election commitment and we’ve worked hard with farmers, stakeholders and communities across the Basin to make sure this works for them.

Farrer MP, Sussan Ley, noted “the buyback cap and all water policy brought into the Parliament are so important to so many of my communities across Farrer, so this a very important day”.

“The Coalition gave a commitment to introduce this cap and we have delivered on that promise. We have also committed to bring better balance to the entire Basin Plan and that remains a key focus today and every day I’m in this job.”

It is important to recognise that the 1500GL cap is a ceiling, not a target, and we will continue to prioritise water recovery through investment in on and off-farm infrastructure.

We are investing $2.5 million a day until June 2019 into irrigated agriculture and already more than 10,000 farmers have benefited from this record investment, which will improve productivity and support the long-term future of the regions.

The passage of the bill was a significant milestone in the journey to reform and to protect the Murray-Darling Basin and to provide water security for regional communities.

The independent stocktake into the Sustainable Diversion Limit (SDL) adjustment mechanism, released late last month, gave all parties confidence that Basin projects are on track and will deliver for communities and the environment.

We remain committed to implementing the Basin Plan in full, on time and on budget, but most importantly with a triple bottom line focus that supports and maintains healthy viable communities and the environment for the future.

Our approach to water reform is internationally recognised and this Bill shows real progress is being made in supporting some of the best farmers in the world.

As part of the Basin Plan water reforms, the Australian Government is making an unprecedented capital investment of almost $6 billion in the future of irrigated agriculture in the Basin.