Child care cost relief on the way for Farrer families 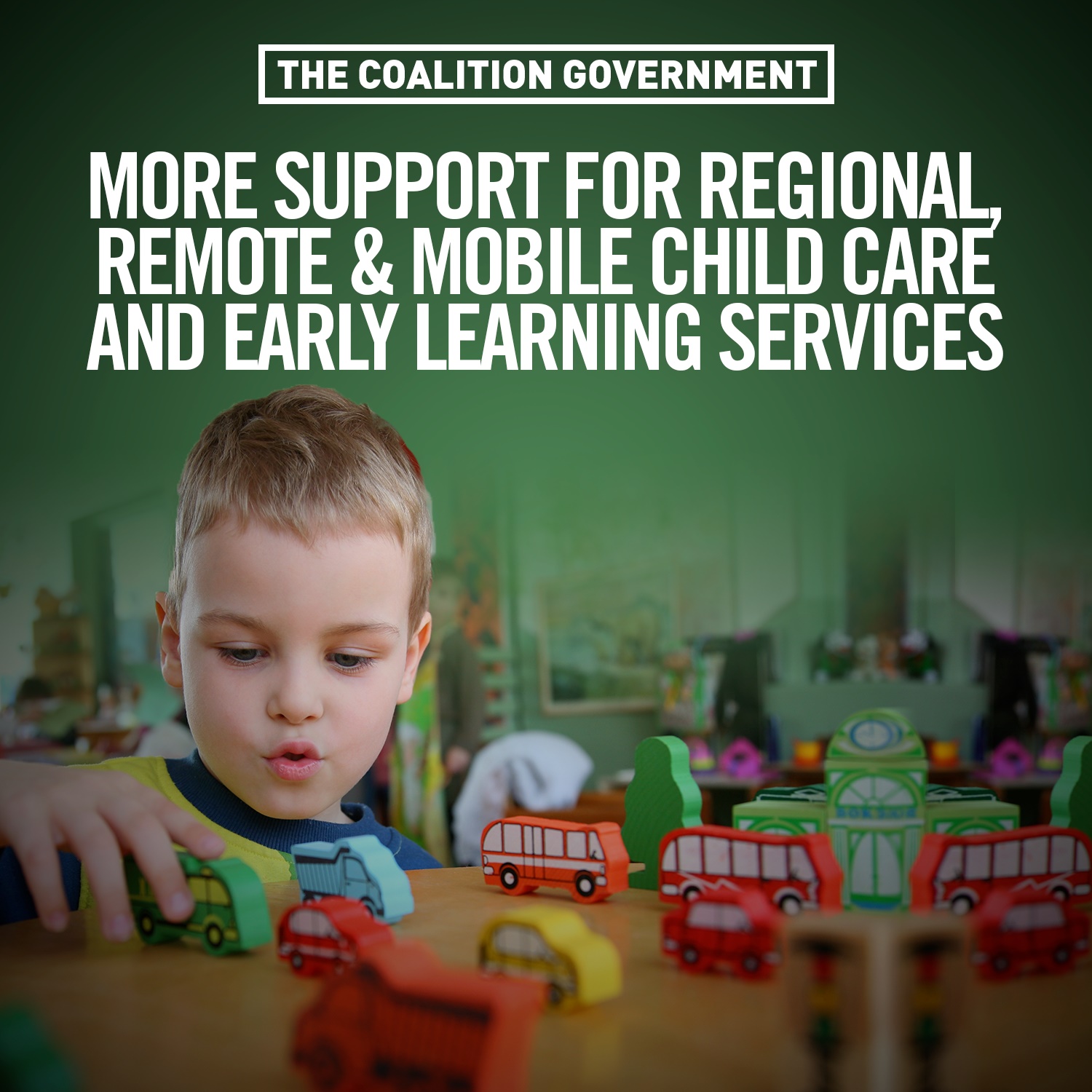 Local MP Sussan Ley today welcomed the biggest reforms to child care and early learning in 40 years, which will see over 6,500 families across Farrer benefit from cost relief and more early learning opportunities.

The Jobs for Families legislation which passed the Senate this week is designed to offer real assistance for local parents finding fees or expenses is putting their younger child’s care increasingly out of reach.

Bringing fee relief with the abolition of the $7,500 child care rebate cap for families on incomes of $185,710 or less, Ms Ley also noted the reforms will particularly benefit rural early childhood education and care services, which have been crying out for additional support.

“A number of these services are part of the old ‘Budget Based Funded’ (BBF) system, which capped their funding and was unable to respond to changes in demand or enable new services to actually open up where they were needed.”

“Education Minister Simon Birmingham has confirmed with me directly that local families using BBF services will receive direct support from our government through the Child Care Subsidy and, for those needing extra support, via an Additional Child Care Subsidy.

“BBF services, including mobile child care units, will also have access to the Community Child Care Fund (CCCF). This fund of $110 million a year will reduce barriers in accessing child care, particularly for disadvantaged families and communities.

In coming weeks the Government will begin communicating the changes to families and services, and a calculator will be available for families to determine how the reforms will benefit them.

For further information on the reforms, visit the jobs for families website

Jobs for Families – the facts at a glance

These detailed reforms are the result of consultation with experts, input from the Productivity Commission and three Senate inquiries and they are the most significant improvements to the system in 40 years and come into effect from 1 July 2018 – there are three key features:

Better support for people working the most and earning the least – The changes simplify the current complicated rebate system by replacing payments with a single, means-tested Child Care Subsidy that boosts the current flat 50 per cent rebate rate to 85 per cent for hardworking families earning up to $65,710 and then tapers down to 20 per cent for families earning more than $250,000 and cuts out for families earning more than $350,000. Our reforms also introduce a three-step activity test with an entry point of four hours a week that gives families eligibility for 18 hours a week of subsidised child care. This will align hours of care with the combined amount of work, training, study, volunteering or other recognised activity being undertaken by parents.

Relief from the rebate cap – We will abolish the $7,500 rebate cap to ensure families on incomes of $185,710 or less aren’t limited by a cap on the amount of child care they can access and the cap will be increased to $10,000 for families earning more than $185,710, overall offering relief to the approximately 100,000 families that hit the current $7,500 rebate cap.

Downward pressure on incessant fee increases – Our reforms introduce an ‘hourly rate cap’ on the subsidies the Government will pay that will set a benchmark price so Australians have a reference point to hold providers accountable and from which they can expect prices shouldn’t dramatically exceed. We will also slash red tape so services can be more flexible in the hours they deliver instead of the current system where families who routinely need and use only four, six or eight hours of care, are charged for 10 or 12 hours.

A Child Care Safety Net will also ensure families who do not meet the activity test and are earning $65,710 or less have access to 24 hours of subsidised care per fortnight so they have opportunities to look for employment or more work if they are in a position to do so, and so that their children have access to early learning opportunities.

Other elements of our reforms will deliver stronger compliance powers which build on the
$1 billion our actions and other legislation have stopped going out the door to people attempting
to rort the child care system.