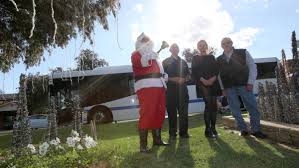 Griffith is glowing a little more brightly this Christmas, as families gather for a Moonlight Movie screening of ‘Arthur Christmas’ tonight as part of the city’s expanded Festival of Lights.

Federal Member for Farrer Sussan Ley said the Festival was being funded under the Building Better Regions Fund, supporting the City of Griffith’s desire to build a sense of community during the festive season.

“The movie night, together with bus tours of Christmas lights across town was a free, three-week festival and is a fantastic community-building project encouraging the inclusion of all cultures and socio-economic backgrounds,” Ms Ley said.

“This festival is a real chance to bring the Griffith community together in the spirit of Christmas. Events like the Festival of Lights create an environment where locals can relax, unwind and get to know their neighbours, and that makes for a stronger community,” Mr Chester said.

“Community Investments under the Building Better Regions Fund let us get behind projects such as events, regional plans as well as capability building activities.”

Mayor of Griffith City Council John Dal Broi said staff had been working hard behind the scenes to make the event a reality.

“12 months ago our Communications Officer had an idea to bring Christmas back to the community. From this, the Festival of Lights was created and this main event, Moonlight Movie at the Museum, is aimed at bringing the community together to celebrate with their families and friends and enjoy a fantastic family Christmas film under the stars.”

The project is jointly funded with the Coalition Government providing $18,500 and Griffith City Council $5,000.