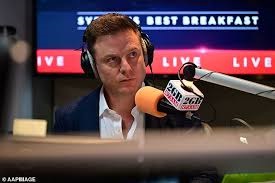 Now it looks like Scott Morrison is leaning in to this week’s dramas, he’s having a bit of a laugh at his own expense…and we know that he’s come under fire for secretly swearing himself into five different portfolios, and overnight he’s been joking about the whole thing on social media.

So, I’ve got some of the jokes in front of me they’re actually pretty good. I mean, when you’re in trouble, you can either laugh or cry and ScoMo’s decided to have a laugh about it. So, some people have photoshopped Scott Morrison doing all different jobs like chopping down a tree or becoming the coach of the Cronulla Sharks…so he’s decided to embrace it and he’s posted a number of these memes on his own Facebook page.

Are his colleagues laughing along? Well, Sussan Ley is the Deputy Leader of the Federal Liberal Party. She’s live in the studio this morning. Good morning to you, Sussan.

I kind of have to laugh about it. Is that wrong?

Well, look, it’s the great Australian tradition taking the mickey out of yourself. I come from rural Australia and west of the Great Dividing Range, you know, it’s something we do…we just have a go at ourselves, don’t take ourselves too seriously when times get tough, perhaps, and I think the rest of the country is joining in by sharing these memes and creating quite a few themselves.

It’s been one of those issues. It’s really divided people, with very strong opinions on either side. And look, I’m not necessarily right on all things, or some things, or whatever…but on this one, I just had the view of…if these powers were used to do something that was going, to harm ordinary Australians, or to benefit the Prime Minister personally, forget it…I mean, he’s dead, buried and cremated.

But because that didn’t happen I didn’t know what the big deal was. But there are a lot of other people, whose opinions I respect, who are saying ‘no, this is a huge deal’…the secrecy of it particularly has done him a lot of damage with his former colleagues, or his current colleagues like you?

And I think that he’s reflected on that, and he’s issued a long statement…he’s had a long press conference, and he’s talked to colleagues about it.

And it’s important that all of that happens…so, there is a serious dimension to this, and I understand that, but yes we would have known, as Ministers (and I obviously wasn’t part of one of the swearing’s in) if those powers had been used. But what this sort of causes me to do, is actually think about those times.

Now, we were, as Cabinet Ministers, locked in our own homes with specially delivered security equipment that enabled us to dial in on Zoom to Cabinet Meetings that went for hours and hours and hours.

We had detailed briefings from, you know, the health people, the hospital people, and I left every single one of those meetings exhausted and worried about Australians and their future, particularly with what was happening overseas.

And. you know, Scott Morrison would back that up with an overnight meeting for another six hours. So, the workload was extraordinary…the pressure was extraordinary, and these really were extraordinary times. It’s fantastic that we’ve got through that, but I certainly haven’t forgotten how difficult it was.

Anthony Albanese is the new Prime Minister, and this was his first day back from holidays this week…and he picked this issue, and of course it’s fertile ground for him, but he’s now saying that this is going to be a major issue. There’s now an investigation that’s been conducted behind the scenes…the findings of that are coming out next week. Where do you expect this to go, where do you think it should go?

Well, hang on a minute, he came back from holiday, and no one says he can’t have a holiday – your listeners would probably love a holiday – but for four days he’s been issuing a spray on this subject…not one comment or reassurance about bringing the price of your mortgage down, your grocery bill down, the cost of fuel and power. And these are the things that he should be prioritising.

I am not hearing what Australians want to from the Prime Minister, about the priorities that they face every single day. I mean, every time you go to the supermarket with the prices ratcheting up, I speak to manufacturing businesses every day and they’re saying ‘look, this is my power bill’. They show it to me…you see the increase….

You know those power bills and those grocery bills were going up when you guys were in office, that’s the reality of the situation. But he’s in office right now right…so, the challenge is now on Anthony Albanese to do something about it.

Can I ask you about another big issue around today? One of the men involved in the 2002 Bali bombings is going to be released early, Umar Patek, one of the bomb makers. So, he was mixing the chemicals that went into the explosives, that went into the nightclub, that blew up and killed all of those Australians and all of those other people as well.

What does this say about the way that Indonesia treats Australia, when it’s happy for these people to get out with an early mark?

Well, this is a kick in the guts to every single Australian who remembers those atrocities from 20 years ago, and the 88 Australians who died there and their families today. Now, we’re all saying this and we’re all feeling it, and I had families from my own electorate, but we saw Anthony Albanese on his bike, riding around with President Widodo a couple of months ago. I think he needs to get on his bike and pick up the phone.

This is, you know, he’s talked about diplomatic representations…this is not weasel words on a prime ministerial letterhead, this is not some diplomat picking up the phone to another diplomat, this should be our Prime Minister on the phone to his counterpart before this guy gets out of jail, to say ‘we’re not happy and we don’t like it and we don’t accept it’.

So, you’re happy with politicians interfering with the judiciary?

Well, this is the judiciary of another country…

(interrupts)…were you suggesting that politicians should be involving themselves in in the way that the justice system works? I mean, we don’t do that here in Australia. And so, why would it work that the Prime Minister would pick up the phone to the President and, and that the President somehow interfere with his judiciary in his country

What’s the mood out there…as far as the new leadership of the Liberal Party leader is in charge? You’re the deputy, what’s the feedback you’re getting so far?

People appreciate that we’re coming out, Shadow Cabinet went to Launceston…we’re out and about in lots of parts of regional Australia too…and we’re listening, and we’re learning and we’re taking feedback from people. And we know that we can put policies together, come 2025 that will enable us to be re-elected. But it’s hard work, it’s strong representation from us, I believe Ben, and we’re not taking a single vote for granted.

And I know you hear politicians say that, but one of the benefits of Opposition is that you can actually step back, take a breath and listen carefully to the feedback from real Australians about what they want to see from us.

Where are you from, originally? you mentioned you live…

In Albury and I represent the Murray and Riverina areas of western New South Wales all the way to the South Australian border…fantastic rural communities.

Well, you are you going to be spending a bit of time in Sydney, so we’ll bump into you from time to time in the studio here…thanks so much for coming in.