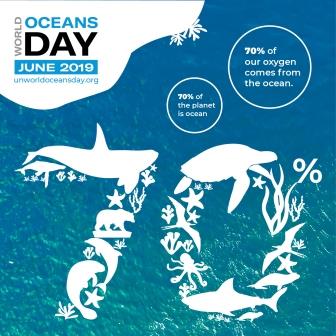 Did you know that 70% of the planet is an ocean?

Did you also know 70% of our oxygen comes from the world’s oceans?

Saturday 08 June is United Nation’s World Oceans Day, to remind everyone of the major role the oceans have in everyday life. They are the lungs of our planet, providing most of the oxygen we breathe.

This year, I want to highlight the impact of plastic waste is having on the health and productivity of the waters surrounding our nation.

From every day household use as well as industry and fishing, more than 13 million tonnes of plastic is estimated to enter oceans every year—causing untold damage and killing around 100,000 marine animals annually.

Recognising the importance of working with the global community to address a global problem, the Australian Government is tackling the amount of plastic waste seeping into our oceans each year with a $167 million Australian Recycling Investment Plan.

Through Australian Aid we are also providing $16 million to the new Pacific Ocean Litter Project to provide financial resources and technical support to the Secretariat of the Pacific Regional Environment Programme (SPREP), as it coordinates Pacific nation efforts to implement the Regional Marine Litter Action Plan.

We are also protecting the second largest marine park network in the world after our government agreed to protect an additional 2.3 million square kilometres through a new national network of marine reserves – and we’ve done this while minimising impacts on recreational and commercial fishers.

The clean-up and protection of Australia’s coasts, oceans and waterways is a priority for our $100 million Environment Restoration Fund, along with $500 million allocated in the 2019/20 Budget to secure the future of the Great Barrier Reef.

Congratulations to every community and individual across Australia, in our region and around the world doing their bit to protect our oceans on World Oceans Day and throughout the year.