‘Teaming up’ scores big at Lavington 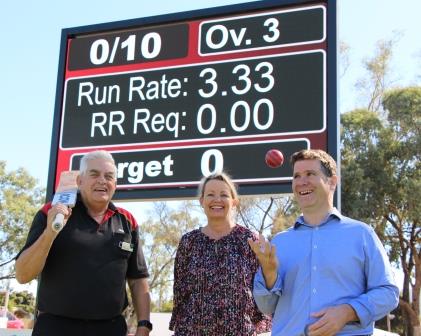 The $110,000 digital addition to the home of the New City Cricket Club and Murray Magpies Football & Netball Clubs came after combined funding was added from the Federal and NSW governments, together with AlburyCity.

“This fantastic new technology will provide a terrific boost to our cricketers, footballers and netballers.”

“It will also hopefully help inspire new generations of young players to take up these great sports, contributing to an even more healthy and active community in our city.”

Albury MP Greg Aplin said the NSW Government is pleased to have assisted with funding of over $27,000 for the project, which comes on top of our previous support for the pavilion and cricket nets.

According to Liberal Party Candidate for Albury Justin Clancy “it was terrific to now see this new electronic scoreboard up and running at Urana Road Oval where it will be used extensively for games and competitions for years to come”.

“It’s a massive makeover for this community facility – well done to both the Murray Magpies Football and Netball Club and New City Cricket Club!”

Local Farrer MP Sussan Ley said improvements like this are exactly the sort of projects which help strengthen local communities.

“The Commonwealth’s $20k contribution to the scoreboard was only after a truly impressive contribution from the oval’s two base sporting clubs, so this really was a combined effort to get something done!”

The first four rounds of the Federal Government’s $90m Stronger Communities Program
has helped build or develop over 50 community projects across Farrer.