$5.2b defence contract lands business for the Border 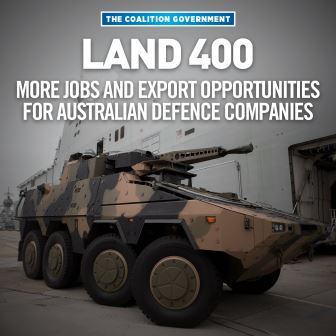 The Turnbull Government will create up to 1450 jobs across Australia through the purchase of a fleet of new Combat Reconnaissance Vehicles for the Australian Defence Force.

The world-class vehicles will be manufactured and delivered by Australian workers, using Australian steel, under a contract with German contractor Rheinmetall.

The 211 vehicles will provide improved safety to Australian soldiers on deployment and on exercises around the world. They will boost mobility and firepower on the battlefield in the decades ahead.

The decision to select Rheinmetall is the result of a comprehensive three-year tender and rigorous testing process, which assessed its Boxer CRV as the most capable vehicle for the Australian Defence Force.

The Government will spend $5.2 billion to acquire the 211 vehicles, which will replace the Army’s current ageing Australian Light Armoured Vehicle fleet.

Over the 30-year life of the vehicles, Australian industry will secure two thirds, or $10.2 billion, of the total investment in acquiring and maintaining the fleet, creating up to 1450 jobs right across Australia.

Rheinmetall is working with more than 40 companies across Australia, ensuring the delivery of these vehicles will be a national enterprise.

Farrer MP Sussan Ley said the announcement was good news for the Albury-Wodonga region, with the government spending $22.5m to upgrade facilities at Bandiana to cater for the new vehicles. Albury based alternator manufacturer Milspec will also team with Rheinmetall creating a likely boost in local jobs over the life of the contract.

“This is an Australia-wide win, with many jobs expected to be created nationally, including 300 or more in NSW and Victoria.

Milspec is an important beneficiary from the agreement, hopefully for many years to come, and that’s on top of the extra investment we are planning for training facilities at Bandiana – all up, this a pretty good outcome for Albury-Wodonga’s economy.”

The new CRVs are part of the Turnbull Government’s $200 billion investment in our defence capability over the next decade to ensure the Australian Defence Force is equipped to succeed in our challenging strategic environment.