Water recovery works get go ahead for Murray & Murrumbidgee Rivers 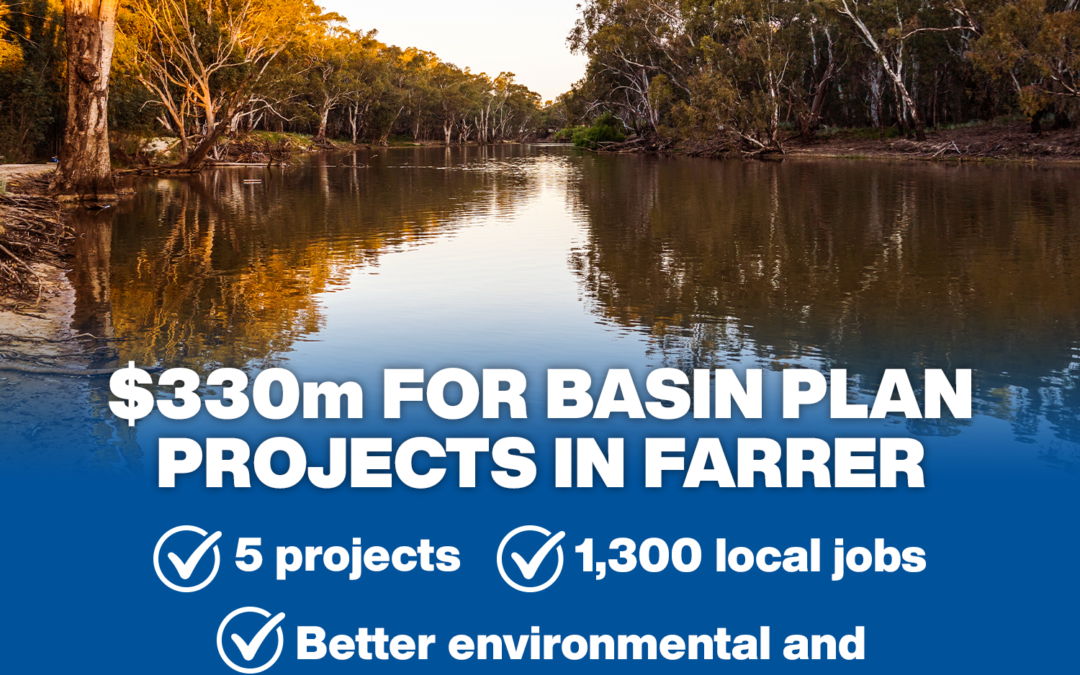 The Australian Government is contributing over $330 million to accelerate delivery of five Murray Darling Basin Plan projects in the New South Wales Murray and Murrumbidgee, generating up to 450 direct new jobs for the region.

Minister for Resources and Water Keith Pitt said fast-tracking the works program would boost regional economies, meet the needs of basin communities and deliver for the environment.

“This is about knuckling down to deliver the shared commitment by the Australian and New South Wales governments to achieve better environmental outcomes in the Murray-Darling Basin,” Minister Pitt said.

“The Coalition Government will continue to work collaboratively with other Basin jurisdictions to achieve a healthy river system that supports thriving agriculture and communities.

“Together with New South Wales, we are committed to working with communities and implementing these changes by 30 June 2024.”

“In moving the projects forward we have taken on board the feedback we have received from communities,” Mrs Pavey said.

“Done right, these projects can contribute to keeping 605 gigalitres of water in productive use, benefit the environment, and deliver the healthy rivers we all rely on.”

Member for Farrer Sussan Ley MP said that the substantial investment in infrastructure in her electorate was expected to create some 1300 direct and indirect infrastructure jobs across Murray and Murrumbidgee communities and generate spending up and down main streets.

“These projects mean millions of dollars and jobs flowing through towns like Wentworth, Balranald, Wakool, Barham and Deniliquin which will make a real difference,” Ms Ley said.

The five projects, including links for more details follow…

Senator for New South Wales Perin Davey said that it was good to see the Commonwealth and State Government working together to get some action along the Murray and Murrumbidgee.

“Getting projects like these in underway and completed its further proof that the water can be delivered and environmental outcomes can be realised without harmful buybacks,” Ms Davey said.

“I’m proud to work with and support the Morrison-Joyce Government that put an end to buybacks that have previously hurt our NSW Basin communities and instead has put its focus on putting these communities at the heart of the Basin Plan.

“Time to get to work and get these projects underway.”

Member for Albury Justin Clancy said this is great win for the Basin communities.

“Today’s agreement creates a pathway that highlights our work to ensure our communities are being heard and that we can deliver tangible outcomes under the Plan,” Mr Clancy said.

Upper House MP Wes Fang said NSW has done a lot of heavy lifting to deliver water back to the environment.
“We are delivering on environmental outcomes for the Murray Darling Basin and we have completed or almost completed 12 of our 21 SDLAM projects,” Mr Fang said.

More information on the projects is available here.