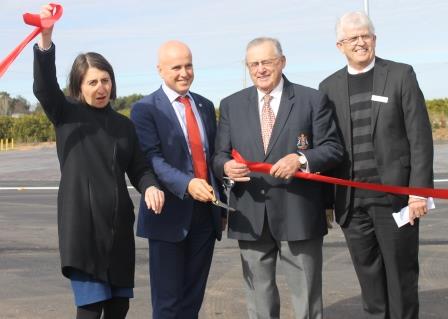 The new Bagtown roundabout is open to traffic after almost six months of extensive works, creating a safer, more efficient traffic solution to address the five approaches merging at the intersection.

Federal Minister for Infrastructure and Transport Darren Chester said the $1.85 million project was delivered on time and on budget, and motorists could expect to see results immediately.

“The Australian Government contributed $925,000 to tackle this intersection’s history of accidents, as it is doing for hundreds of local projects nationwide under the Roads to Recovery program,” Mr Chester said.

“The New South Wales Government has also provided $925,000 under the Restart NSW Fixing Country Roads fund, and initiatives such as the Bagtown Roundabout will remove constraints on the local road network, improving access to markets for regional producers,” Ms Berejiklian said.

Federal Member for Farrer Sussan Ley said transport corridors such as this one were vital to the ongoing supply and delivery of goods across the nation and, in turn, to the survival of the agricultural industry.

“Four legs of the roundabout will be open to traffic by 4pm today (Wednesday 28 June), with the Thorne Road leg closed until a new roundabout is built on Kidman Way,” Ms Ley said.

Mr Piccoli said the NSW Government had committed to funding this significant milestone in the city’s transportation history.

“This Government has continued to maintain a record level of transport and roads investment of $41.4 billion over four years,” Mr Piccoli said.

“Construction will continue this year on works on Thorne Road to the west and link with the state road network via the roundabout on Kidman Way at the intersection of Thorne Road,” Cr Dal Broi said.