More than 2000 medicine brands to drop in price 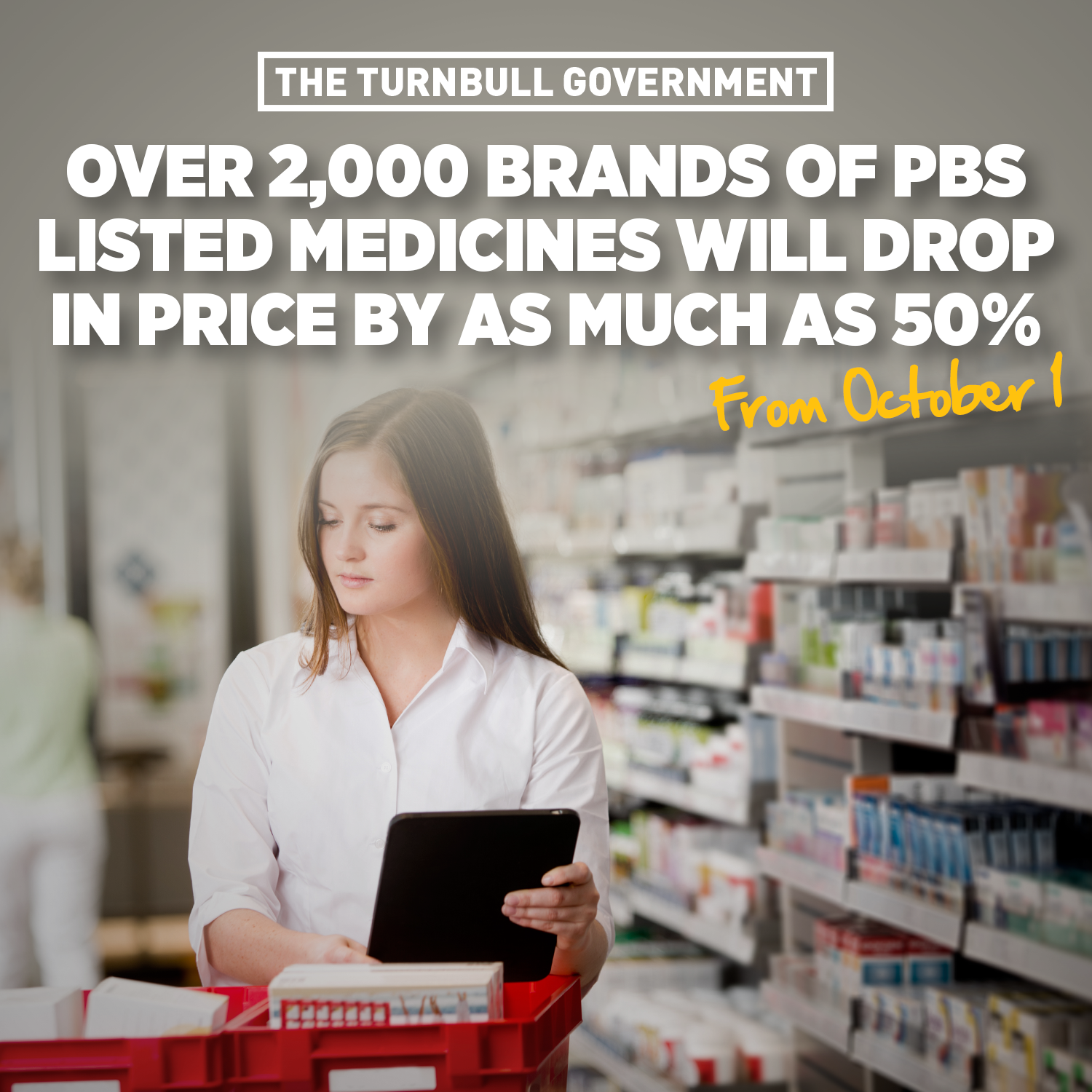 More than 2000 medicine brands treating common conditions will drop in price for millions of Australians from next month – some by as much as 50 per cent or more – with the Turnbull Government delivering a win-win for consumers and taxpayers.

Minister for Health and Aged Care Sussan Ley today announced that from October 1 2016, one-in-three medicine brands on the Pharmaceutical Benefits Scheme (PBS) would be cheaper for some consumers by as much as $20 per script per medicine – or more than $200 per year.

Ms Ley said the savings would be even higher for many Australians who took multiple medications daily.

“The Turnbull Government is continuing to deliver the largest ever reductions in the price of medicines for consumers across the Pharmaceutical Benefits Scheme,” Ms Ley said.

“Millions of Australians will benefit from these innovative reforms, with some people suffering multiple chronic conditions such as osteoporosis, high blood pressure, diabetes and gastric reflux set to save as much as $400 per year on their medicine scripts.

“This announcement will also help ease cost pressures on a number of long-standing medicines on the PBS treating life-threatening diseases such as breast, prostate and ovarian cancer.”

For example, a non-concessional patient with diabetes, osteoporosis, high blood pressure and gastric reflux who is currently taking:

More than 80 per cent – or about 1600 – of the 2000-plus brands of medicines set to drop in price next month would see a direct saving to some consumers.

The remaining 20 per cent – those priced above the general PBS co-payment of $38.30 – would see a saving to taxpayers.

“In addition to saving consumers real money cash in hand, this innovative Coalition reform will also save taxpayers nearly $900 million over the next four years by ensuring the Government isn’t overpaying for medicines either,” Ms Ley said.

“The savings from our 2015 PBS Sustainability Package are already being used to subsidise new breakthrough medicines like the $150,000 melanoma treatment Keytruda.

“It’s a win-win for taxpayers and consumers and is another example of the Turnbull Government making medicines more affordable for millions of Australians.

“However, as the health needs and costs of Australians continue to increase we still need to continue with our budget repair to protect Medicare and subsidising more medicines for current and future generations.

“We must not have a return to Labor’s day where they blocked new medicines for conditions like asthma, mental health and chronic pain from being listed on the PBS because the ALP could not afford to pay for them.

“The Coalition has made a clear commitment in Government that we will list medicines on the PBS without fear or favour if recommended by the independent expert Pharmaceutical Benefits Advisory Committee (PBAC).

“That’s why today we also call on Bill Shorten and Labor to rule out a Cabinet he leads voting to block new medicines from being listed on the PBS if recommended by the Government’s independent expert committee.”

The changes deliver greater price reductions by removing the ‘originator’ or premium brand version of the drug from pricing calculations for medicines, meaning the cost of cheaper generic brands are used instead.

They come into effect from October 1 2016. Find out more at www.health.gov.au.