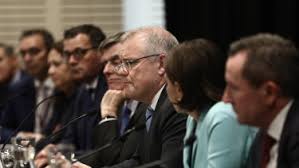 At the final meeting of the year, leaders discussed Australia’s economic recovery, the COVID-19 response, the Australian COVID-19 Vaccination Policy, the Framework for National Reopening by Christmas, helping Australians prepare to go back to work in a COVID-safe environment and measures to get the economy moving again.

National Cabinet continues to work together to address issues and find solutions to the health and economic consequences of COVID-19.

National Cabinet received a detailed briefing on the labour market by the Commonwealth Treasury Secretary Steven Kennedy and National Skills Commissioner Adam Boyton. Leaders also noted progress on the successful rollout of the JobTrainer program for over 300,000 free or low-cost training positions across the country.

The Acting Chief Medical Officer, Professor Paul Kelly, provided an update on the latest epidemiological data and medical advice in relation to COVID-19.

There have been more than 28,000 confirmed cases in Australia and, sadly, 908 people have died. There are now around 50 active cases in Australia, all in hotel quarantine. Over the past week there has been no cases of community transmission in Australia. More than 10 million tests have been undertaken across the country.

Australia has done well on both the health and economic fronts compared to most countries around the world. National Cabinet noted the significant increase in COVID-19 cases in many countries and the comparative strength of Australia’s effort in addressing COVID-19 compared to most other developed economies. Globally there have been over 68 million cases and sadly over 1.5 million deaths. Globally, average daily cases have now reached more than 600,000.

National Cabinet welcomed Australia’s achievement of a goal to reopen Australia by Christmas under a three-step framework agreed by all states, except Western Australia. All states are on track to successfully reopen state borders by Christmas, subject to health precautions.

National Cabinet welcomed the extension of vaccine purchasing arrangements with AstraZeneca and Novavax, which bolster arrangements with both vaccine suppliers and support Australia’s diversified portfolio of vaccines which also include the Pfizer/BioNtech vaccine and the COVAX facility.

While vaccines are being developed, and treatments for COVID-19 are being improved, an important means to continue to bring about a return to normal economic and community activity is rapid testing, contact tracing, isolation and outbreak management. These measures back up the ongoing need for COVID-safe behaviours such as social distancing and good hygiene.

National Cabinet agreed that Infrastructure Australia will now evaluate project proposals which require more than $250 million in Commonwealth funding, an increase from the existing threshold of $100 million.

The increase will better focus Infrastructure Australia‘s business case evaluation process on the key projects that will help rebuild our economy and support jobs into the future.

All states and territories have advocated for the increase and it is supported by Infrastructure Australia.

The increase will be reflected in an updated Statement of Expectations to be issued by the Deputy Prime Minister and Minister for Infrastructure, Transport, and Regional Development, and will take effect from 1 January 2021.

Leaders agreed the immediate priority was to pass legislation streamlining approval processes and to develop national environmental standards reflecting the current requirements of the EPBC Act.

Subsequent phases of reform will build on these streamlining efforts and address any further changes and improvements, including to environmental standards, taking into account the recommendations of the independent review led by Professor Graeme Samuel AC.

All jurisdictions signed the Intergovernmental Agreement on Automatic Mutual Recognition of Occupational Registrations, with the exception of the ACT. The Agreement, which will be subject to revision following consultation and to reflect the legislation agreed by the signatories, will ensure that licenced workers will not bear additional costs to perform the same activities in those jurisdictions and makes it easier to do business across state and territory borders. The ACT will continue to work towards finalising arrangements, with the aim of signing the Intergovernmental Agreement shortly.

National Cabinet acknowledged the importance of Australia’s agricultural sector having sufficient workforce to harvest what is a bumper season across the country. It was agreed that bilateral arrangements will be established between the Commonwealth and jurisdictions based on each jurisdiction’s health protocols for Pacific workers. As a next step, jurisdictions will write to the Commonwealth outlining their health protocols (including for example, on-farm quarantine arrangements similar to the Queensland model, requirements for workers to remain in the jurisdiction etc). The Commonwealth will then be able to facilitate visas for workers under the Seasonal Worker Programme and the Pacific Labour Scheme based on these bilateral arrangements.

Quarantine arrangements are an essential part of Australia’s response to COVID-19. Existing quarantine arrangements will continue to prioritise returning Australians. Other groups including international students and skilled migrants will be further considered by National Cabinet in February 2021 subject to the health and safety advice.

National Cabinet agreed that the Commonwealth and NSW will work to strengthen standards regarding quarantine and testing arrangements for international air crew and noted an additional compliance requirement being put in place for incoming diplomats.

National Cabinet discussed priorities for 2021 to support Australia’s COVID-19 recovery. Priorities tasked to the Council on Federal Financial Relations and the National Cabinet Reform Committees include: