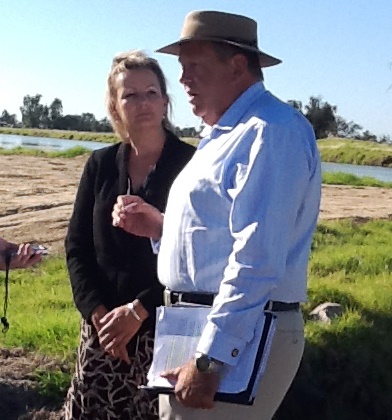 The Australian Government has announced a new round of funding for private irrigation infrastructure operators in New South Wales.

Announcing the new round in Deniliquin today, Bob Baldwin, Parliamentary Secretary to the Minister for the Environment said “funding will be available to projects – in the Murrumbidgee and Murray catchments of the Southern NSW Murray-Darling Basin – that are specifically designed to improve the efficiency and productivity of water use and management of irrigation schemes”.

“By investing in off-farm infrastructure, the Government is further increasing the water efficiency of irrigation networks and delivering water savings for the environment.

“The Abbott Government is committed to recovering watering through infrastructure investments and this project – as part of the recently announced $350 million NSW package – is just one way we are ensuring the sustainability of Australian irrigators”, Mr Baldwin said.

“The benefits of off-farm infrastructure projects go beyond irrigation systems, with benefits directly flowing to the local community through local contractors and suppliers. These projects will help secure long-term viability and growth through the Basin”, Mr Humphries said.

Water savings generated by off-farm infrastructure projects will be shared between individual irrigators and the environment, with water savings transferred to the Commonwealth Environmental Water Holder to be used for environmental watering purposes.

Eligible organisations are now invited to submit an application for funding. The assessment of applications will be processed in two stages. The application period for Stage One will close at 2pm (AEDT) on Thursday, 30 April 2015.

At the completion of the Stage One process, successful applicants will be invited to meetings with the Department of the Environment to negotiate and further develop the project proposal.

More information about the Private Irrigation Infrastructure Operators Program in NSW, including guidelines and the Stage One application form are available via this link.