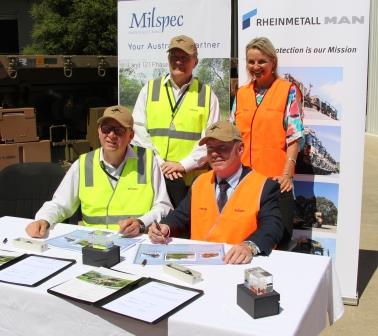 The $10 million deal is another major boost for the North Albury based company, which will supply critical parts to new defence fleet vehicles, replacing aging medium to heavy trucks and trailers.

Congratulating the company, Minister for Defence the Hon Christopher Pyne MP said “Milspec has been manufacturing in Australia for 40 years supplying components to defence forces around the world, a mark of their competence and reliability in the sector”.

Attending today’s announcement, Member for Farrer Sussan Ley said “with 90 local employees, Milspec was a significant and important part of the local community and it is fantastic to see their ongoing success”.

“Defence industry is an important part of many regional economies, and this new contract acknowledges Milspec as a premier supplier of subsystems to the defence industry.”

Rheinmetall is supplying 1044 vehicle and 872 modules to the Australian Defence Force under LAND 121 Phase 5B. Delivery of vehicles is expected to continue through to 2024.

The new contract is on the back of last year’s announcement of Milspec’s planned involvement with Rheinmetall to supply componentry for the ADF’s LAND 400 Combat Reconnaissance Vehicles.