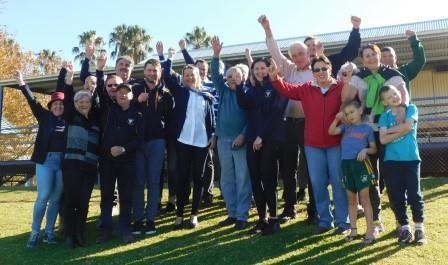 Local MP Sussan Ley today announced that a re-elected Morrison Government will provide $1.4 million for a new clubroom and changing area of the Narrandera Sportsground (NSG)*.

Ms Ley said the investment will deliver a much needed facelift at the home of the Narrandera Eagles, so that all teams and visiting sides can better utilise the existing sportsground.

“It will also put Narrandera high on the list to again attract national sporting fixtures such as AFL, and the prospect of an NRL clash similar to the AMCO Cup match played here a number of years ago.”

“This development is being jointly funded alongside Narrandera Shire Council, the Narrandera Imperial Football-Netball Club and NSW/ACT AFL to provide the NSG with larger, more modern facilities for users and spectators,” Ms Ley said.

Narrandera Shire Mayor Neville Kschenka said “this is a great opportunity to further enhance our facilities. The sportsground is recognised as a leading sports venue in the Riverina and the redevelopment of the clubhouse and changerooms is something we have been advocating for some time.”

“It also develops a special triage area for sports injuries which are becoming more pronounced because of the professionalism in competitions.”

“These works will not only provide the Eagles and supporters with modern club facilities, the change in facilities will be available to other sports such as netball, touch football, rugby league and sheep dog trials.”

“Access to the playing field by the disabled will also be improved, which will encourage more inclusive sporting events across our community,” Mr Savage said.

Ms Ley said “this type of investment shows my government is committed to the future of our regional communities and is only possible because of our plan to build and grow a stronger economy.”

*Narrandera Sportsground redevelopment – $1.93m
This project will replace the old building with an enlarged, modern, two-storey, brick and colorbond structure; the lower level will include two changerooms with massage/strapping areas and one officials change area all of which are universal access.

It will also provide a dedicated medical room for on-site assessment of injuries and triage. Provision is also made for materials and equipment storage areas.

Green Army on the ground in Farrer