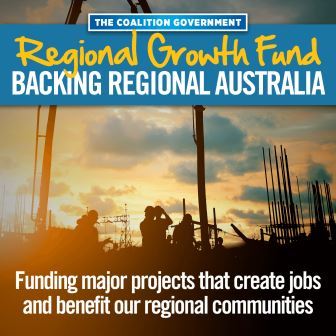 The Coalition Government’s highly anticipated Regional Growth Fund is officially open for applications, with federal MP Sussan Ley hoping for big ideas from local communities which can help bolster the future of our region.

“The Regional Growth Fund can support investment projects from the private sector, other levels of government and not-for-profit organisations, and I would encourage anyone with big ideas in Farrer to take a look at the program guidelines,” Ms Ley said.

Minister for Regional Development, Territories and Local Government John McVeigh said the Coalition Government will invest a minimum of $10 million toward each successful infrastructure project, representing a maximum of 50 per cent of costs.

“The Regional Growth Fund is a game-changer across Australia, unlocking government funding for projects that have the capacity to transform regional areas.”

“Successful projects will provide greater support for existing industries such as agriculture, tourism and anufacturing, allowing them to innovate and flourish,” Dr McVeigh said.

For more information on the program, including the application process link here.

Over $70,000 support for Albury veterans and legacy activities